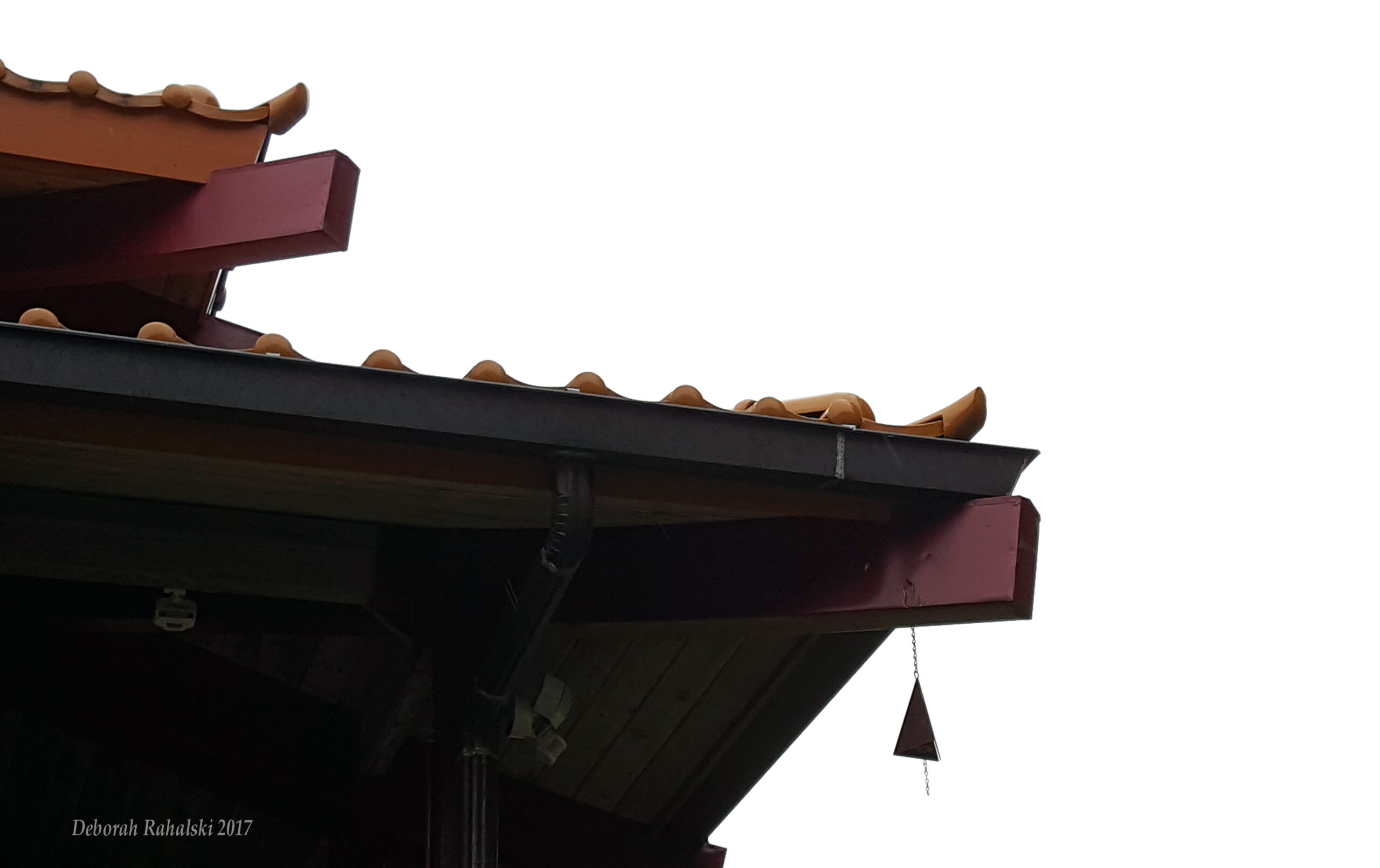 So fellow travelers, after gathering my koans* from the sages along the walkway, I approached the main temple and saw a path which lead through a small garden of wild flowers.

Perched on a large rock at one end sat a fat round statue I recognized as the Buddha of  prosperity, health and happiness. (He’s sitting on the far left in the photo above) A wide flat rock offered the perfect place to sit among the flowers and meditate with this jolly Guardian of Joy.

As I sat in contemplation, I became aware of the unaddressed burdens I still carried from the months of difficult experiences at work. Now in this graceful spot, quiet but for the gentle buzzing of bees I could let those emotions speak freely, seek to understand the fears that fueled them and ask for ways to heal, be more resilient and move forward. After some time, I felt something shift within me; exactly what the messages were I could not say right then but I felt settled enough to leave an offering in Happy Buddha’s open hands and continue on my way.

Off to one side of the temple was another red tiled building which was the meditation hall of Kwan Yin, Goddess of Peace and Compassion. As Buddhism spread through out Asia, its priests incorporated elements of indigenous belief systems to encourage local populations to convert. Often, as with many ancient spiritual practices, these were matriarchal Goddess centric belief systems.  The evolution of Kwan Yin as a key figure in Buddhism is an example of this. I would have liked to see the meditation hall, but a hand painted sign in both traditional calligraphy and English informed me it was closed for “Redoing to prepare for coming soon celebration of Ancestors Anniversary,” so I walked over to the main temple.

As I climbed the temple steps, a gentle breeze stirred sending a wave of chimes from the small bells hanging off the corners. I stopped and closed my eyes, momentarily transported back to Japan by this welcoming, comforting sound memory.

I left my shoes on the numbered rack outside the temple door and entered the great hall.

Immediately a stillness deeper than any worldly silence enveloped me. Circling around the offeratory stations dedicated to different Bodhisattvas, I gradually made my way to the center of the temple and sat on the floor. The vast luminous white Buddha rises 37 feet, sitting stoically in a giant lotus blossom, eyes closed, hands clasped in prayer surrounded by ten thousand tiny buddhas. Gazing at the Buddha’s calm expression for a moment I thought I saw a smile. Blinking I looked again and now I feel more than see this smile. Subtle, immutable, born of uncorruptable truth and radiating a wisdom beyond time and human effect. I closed my eyes, committing this Smile to memory, waiting for it to permeate deep into my consciousness.

A young nun seated by the doorway indicated I was permitted to take pictures, but I chose not to.  Somewhere within this meditation I received reassurance this Presence I had felt did not require a photo to be recalled.  I headed on my way, carrying a profound feeling of completeness I could not put into words.

Some hours later, seated at the table in the cottage where I stayed the next two nights, I discovered this reassurance was as real as the chair I sat in as I began a drawing of the Buddha’s face. Working on the round nodules of the Buddha’s head became a form of meditation. The harder I tried to get them just right, the wonkier they came out. So I closed my eyes, recalling the Smile with it’s serene wisdom. The feeling I had carried from the Buddha’s Great Hall was there. Writing about it now find I have the words to describe what I felt.

It was as if every moment of suffering I or any being had ever experienced had not only been acknowledged, but shared and transformed into pure energy, energy which now could be used to create change for the better. Hope and Light from darkness.

*Koans are riddles, used in Zen Buddhism to push seekers beyond logical reasoning to find enlightenment in the mystery of being.  One of the most famous is “What is the sound of one hand clapping?”  May vipassana bless you.