So fellow travelers, proof not all demons live in dark gallery basements. 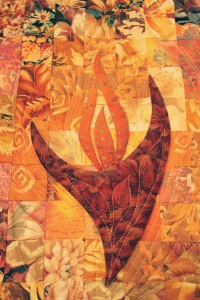 detail from a quilted wall hanging in the gallery loft

Arriving back at the loft apartment in Greenwich, I left the noisy but drive-able car parked under a shady tree and stopped at the little cafe across the street to grab something sweet. As I turned the key in the front door I noticed I had left the lights on in the gallery.  Right…… I had gone out the back door of the apartment this morning without going downstairs to the gallery. As I walked out of the utility closet which housed the bank of light switches I noticed another set of stairs going down

into a dark abyss of a wide open basement.

A sudden chill ran through my bones.

I scampered up the stairs to the loft apartment like a startled chipmunk making sure to bow as I passed the Buddha on the altar. Turning on a few extra lights, I fired up some music on my laptop and sipped the mango smoothie from the cafe while scanning my phone for texts from my two roommates who were on their way.  My plan was to leave the car parked here and bum rides for the rest of the weekend, thus limiting driving to the trip home.

It was a perfectly reasonable plan and yet I could not shake an insistent feeling I needed to go home now. I texted home to check in.  My daughter responded all was well, she was headed to work and then to a few grad parties with friends. Still, I was sweating, breathing rapidly and could not stop pacing.  I recognized the early signs of a panic attack.

Several years ago, while on a trip out of town, I was in a minor car accident. No one was hurt, no tickets were even issued but our car sustained enough damage it had to be towed to a shop for repairs. I often say, for moments like these I have a triple A membership but the fact is that membership had always been used for dead batteries, flat tires and keys trapped in locked cars. I had never been in an accident and getting hit left me shaking. It happened in an intersection in downtown Philadelphia seconds after two cars in front of me collided. I am certain the other driver did not see my car because of the first accident.  The police officer who came to the scene indicated the same thought.

Although I was unhurt and our car was repaired within a few days it would be weeks before I could pick up a set of car keys without breaking into a cold sweat.  For months I woke at all hours from nightmares I couldn’t remember, heart racing, sweating like I was breaking a fever.  I avoided driving the car which had been in the accident. Two months later when our other car broke down on the NYS Thruway during my first attempt to attend a Bedlam Farm Open House I became convinced I was possessed by some vehicular curse.

I am not ( or at least I had not been ) a superstitious person. In fact as far back as I can remember I have always believed in God and angels not because of what I was taught in Sunday School but because I had a consciousness awareness of a loving Presence around me. In fact most of what I was taught in church did not correlate with my personal experience and I would soon learn the main lesson traditional religious instruction had to offer was a directive to stop asking questions. I never stopped, although I did keep quiet in church school. No matter, I knew my experience was real.  Certainly in over half a century of living there have been some dark times of doubt. My late teens and early twenties were fairly cynical but I believe my exposure to Eastern spiritual practices when living in Southeast Asia helped me find ways to maintain my inner gyroscope even in the darkest valleys I have walked.

Which is why the post accident PTSD responses a therapist helped me identify really threw me off track. At first I refused to accept the diagnosis. PTSD was something heroes and survivors could claim. I hadn’t come home from a war or suffered abuse. For heaven’s sake I had been in a minor car accident, dammit.  After all the life experiences I’ve been through, with all the options at my disposal from years of spiritual and alternative healing studies I should be able to bounce back without claiming a badge of honor I didn’t deserve.

But there was no denying the uncontrollable, visceral reactions I was experiencing. It was clear I was having panic attacks and as our therapist explained since they had been triggered by a specific event, not a general condition of anxiety, I was dealing with PTSD. For a good long while nothing in my arsenal of techniques helped, not t’ai chi, meditation, aromatherapy. There were moments I thought I would never recover my peace of mind. Over time the episodes diminished. I even survived a terrifying tire blowout while driving my RV,  but as I paced the beautiful wood floors of the loft apartment I knew the panic demon had not really gone very far. It did not matter one iota that I had not been an any kind of accident, or that the car was drive-able, loud yes, but still quite driveable, thanks to the kindness and good work of the mechanics in town.

I forced myself to take the keys, get in the car and drive it around the block.  I needed to move it from the “two hour limit” parking spot in front of the gallery anyway.  I shifted the rear view mirror so I could look myself right in the eyes and said “Under no circumstances are you going home before Sunday.”

I walked back into the apartment just in time to catch my cell phone ringing.