So fellow travelers, there’s been a hearty discussion on the CGBF pages about the timing of the holiday season.  As someone who looks away when accosted by Christmas decorations right after the Back to School sales I am on board with the “wait ’til it really ‘Tis the season” sentiment.  I for one thoroughly enjoy the opportunity to indulge in garish Halloween decor. Several years ago, my younger daughter hand painted several slate slabs with sorrowful RIP messages.  They look spectacular draped with wispy spider webbing, made ghoulishly convincing by the scattering of skeleton bones poking up from the ground.  Or course, there is always the chance that the entire display will be buried under a mass of early Lake Effect snow, though thankfully  nothing like western New York has experienced this season.

Halloween snowfall 2008  (there’s a skeletal graveyard somewhere under there )

The same daughter and I engage in a debate every year about when to tune the car radio to the 24/7 Christmas music.  I prefer to hold out for the day after Thanksgiving. However, this year she has her driver’s license so I often (pet peeve #15  other drivers who do NOT turn off the radio) get blasted by Holiday Tunes whenever I actually get to drive my car. She is after all someone who watches the movie  ELF  all year long.

This week, however, I will have to do some decorating before Thanksgiving.

You see my Christmas tradition has always been to have the outdoor lights ready to go on a timer set to click “on”  at sunset of Thanksgiving Day.  This way we either come home to or our guests leave in a glittering display of Holiday Spirit. This year my daughter leaves with her marching band on Monday evening to head for New York City to…..(drum roll)…… perform in the Macy’s Thanksgiving Day Parade.  Yeah…uh huh…. THE  Macy’s Parade…complete with a televised performance at the star in Herald Square  ( at 10 :18 am  we are told…only on NBC ….) You bet your holly I will be standing on a street corner well before the crack of dawn Thanksgiving morning so I can watch those kids march by.

As a kid growing up in the Bronx  the Macy’s parade was seared into my brain as a major holiday tradition of which only Santa looms larger and he himself shows up at the end of said parade.Which is  kind of where the whole “Let the Holiday Season begin”  mythology comes from. Years ago Macy’s wanted shoppers to get at it earlier. Stage a parade, put the Jolly Elf himself at the end, let the spending begin.  I am not certain that’s exactly how it evolved, but it sure fits the mold.

So on Monday evening as our daughter heads for NYC  ( we head down the day after ) I will be scurrying about the front lawn, madly recreating the swirly twirly candy cane forest from the aforementioned movie and decking a few halls with lights so she can come home to Christmas.

So Seasons Greetings my friends, early or not  Holidays here we come.  I leave you with this wonderful version of my favorite winter song. 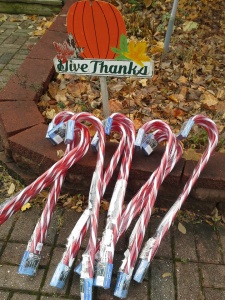