So fellow travelers, with the ominous rumble of approaching storms urging me forward, the adventure continues…. 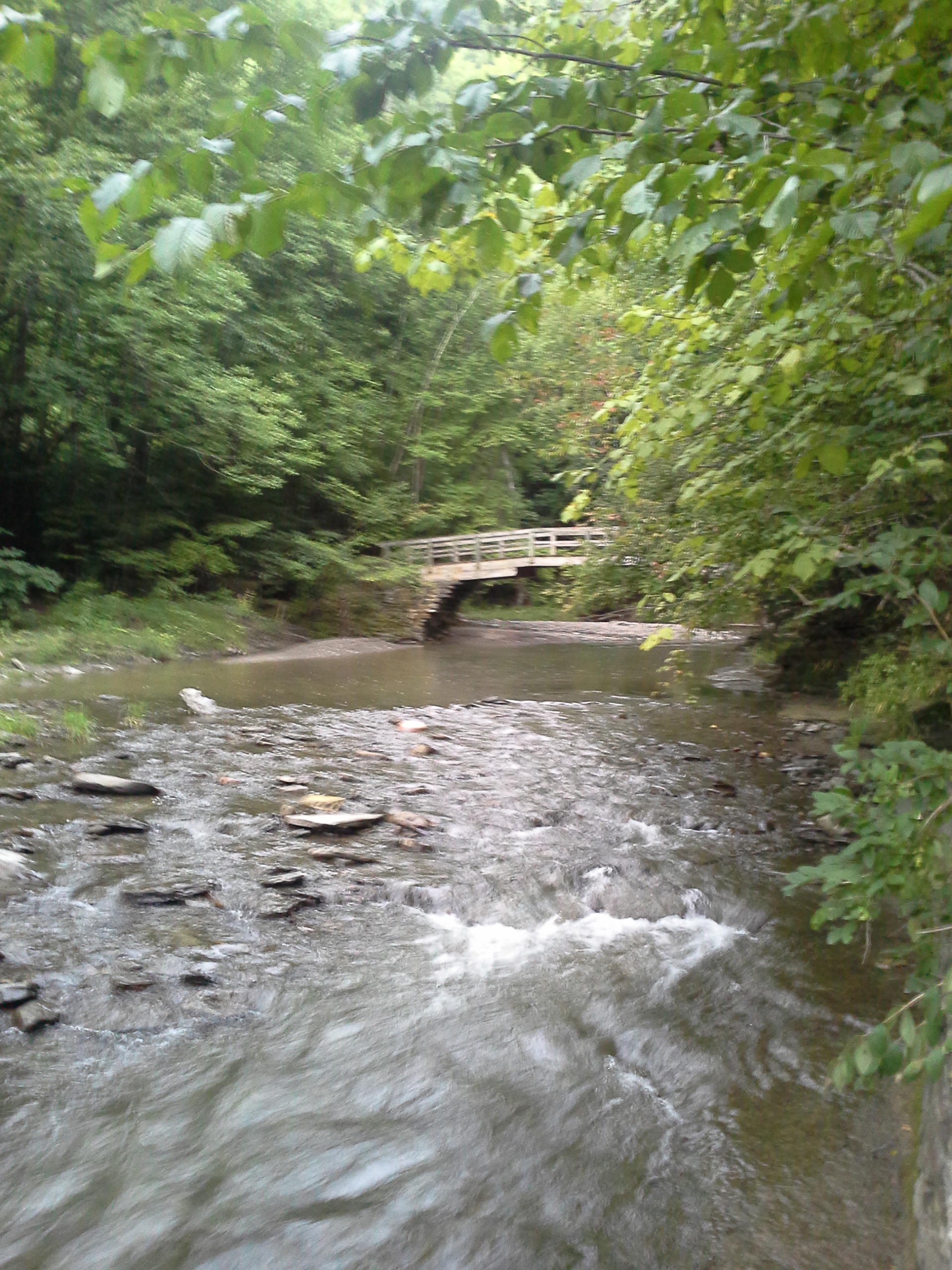 The bridge crossing before the storm.

It was a short trek to the bridge which crosses between the Rim ad Gorge trails.  Lucifer Falls, the main attraction of the Gorge Trail, is less than a quarter mile up a steep, but well groomed path above the bridge.  After crossing the bridge I headed up the  trail but a few minutes into the steep climb, a loud clap of thunder had me doing a 180 and heading right back down the trail.  Within minutes the skies opened up and heavy rains had me dodging into a stand of tall pines for some shelter.  Tucked against the tallest trunk,  fully aware this was not the optimum stopping point in a thunderstorm, there was enough cover for me to grab my rain jacket out of my pack without soaking its contents. I threw the jacket on over my backpack, cinched the rip cords as tight as possible and headed back on the trail.  A brilliant flash of lightning told me I had done so none too soon. 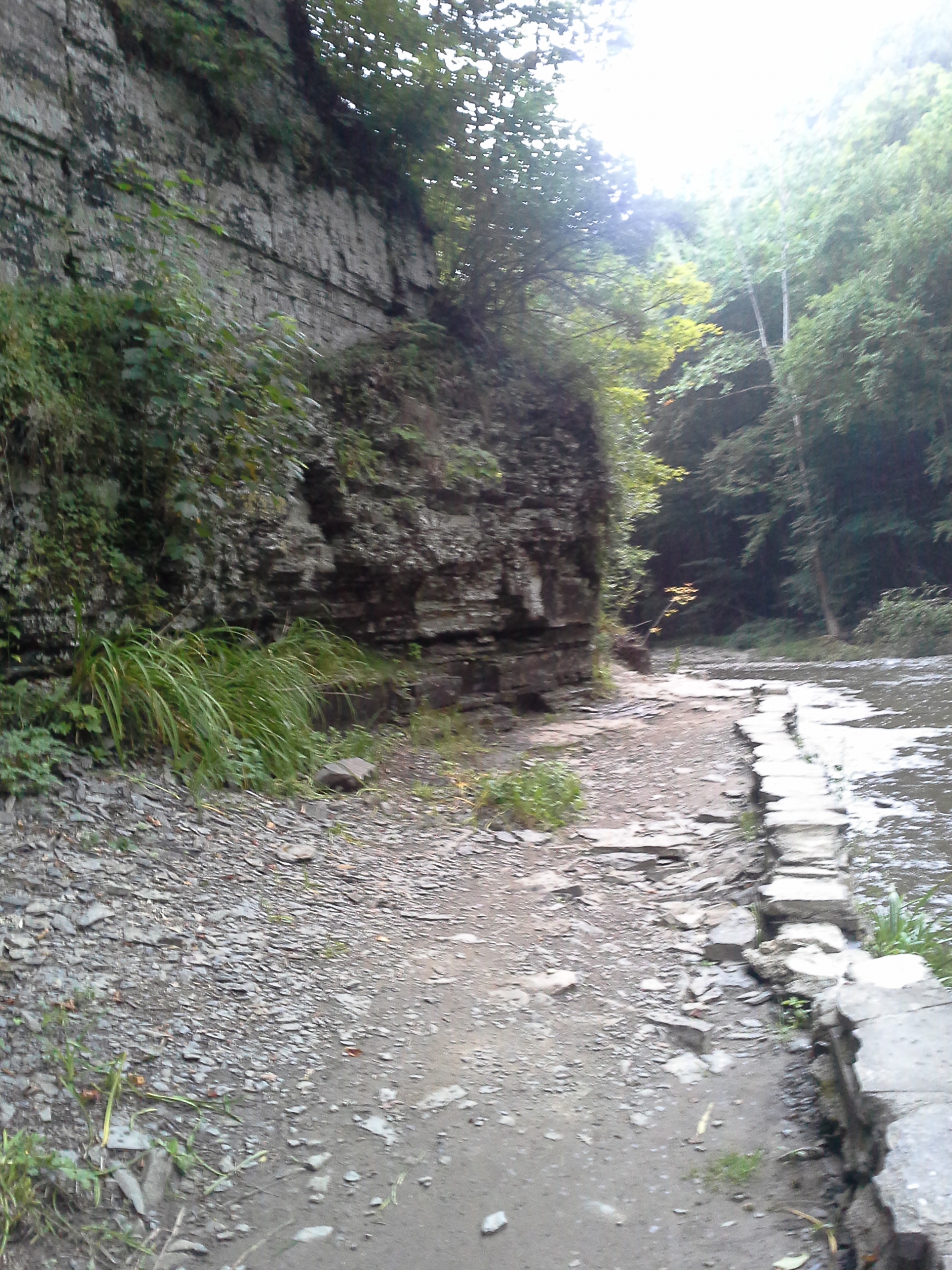 The upper section of the Gorge trail has several sections paved with flagstones, providing stable, flat walking surfaces.  This is a definite advantage in heavy rains when water runs down onto the trail from the steep hills of the Gorge.  It was raining so hard, I could barely make out the other side of the river. The trail already had small rivers running across it, still I knew there was a rock overhang close by on the trail which would provide some shelter. As I rounded the corner and the rock cliff came into view I saw a few other hikers had the same idea.  My spirits lifted because company is always welcome in a storm.  At this point the thunder and lightning was continuous and the light to sound time ratio indicated the storm was moving closer.  Company was indeed a welcome distraction. 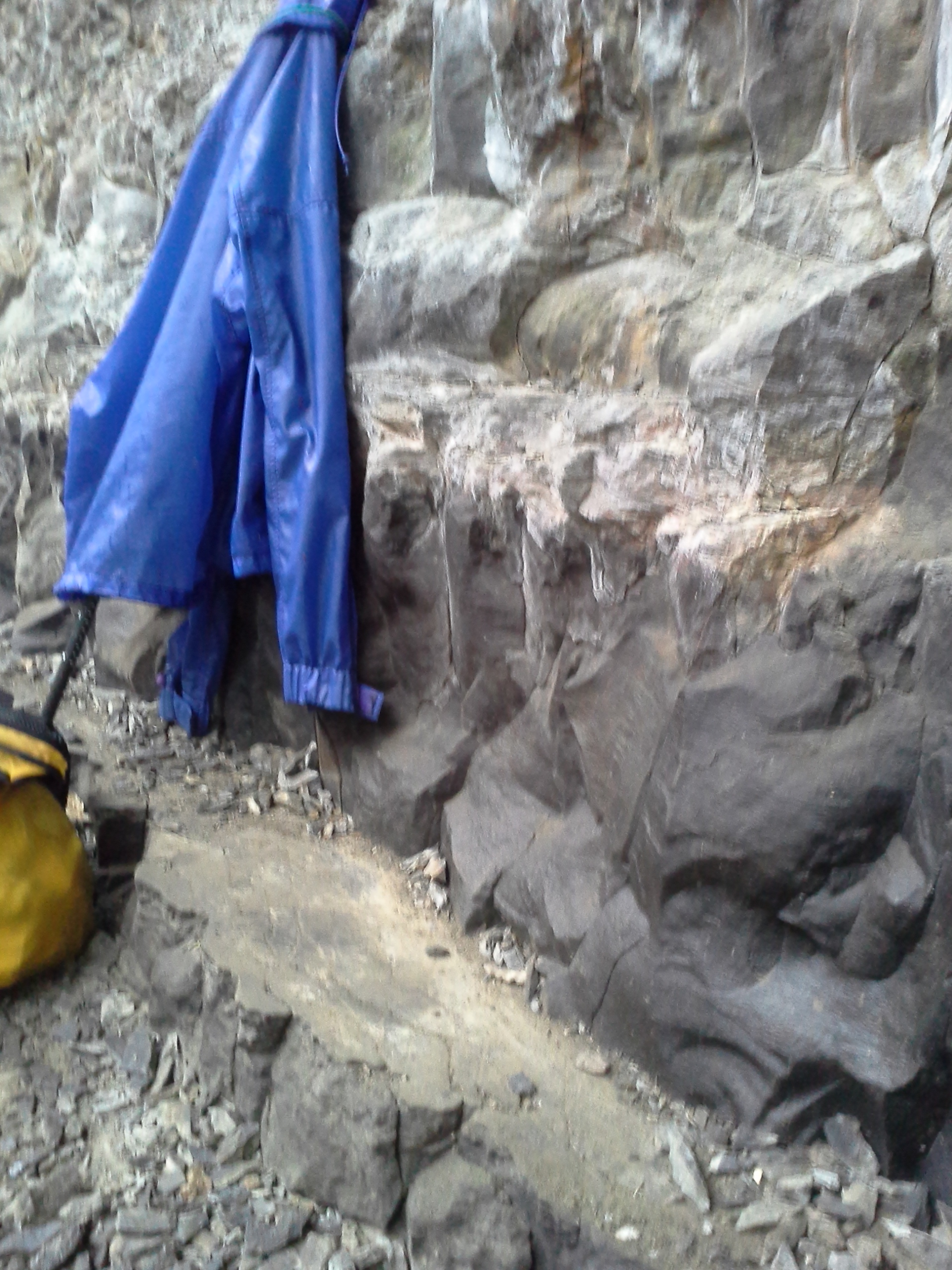 Rain jacket drip drying as we sheltered under the rock ledge.

As I arrived at the rock ledge, everyone began introducing themselves. Among my fellow refuge seekers were a married couple from India with their 10 year old daughter, a woman in her 60’s hiking with her teenage niece and a young couple out on their first hiking trip. As we chatted the rains would lighten then begin with renewed force, although the thunder was more sporadic. Several of us tried to access the weather radar on our phones, but found we had no signal, a common occurrence at many spots along these trails. After about a half hour, the rains finally let up to a light sprinkle.  The young couple in matching LLBean rain gear headed down the trail and the Indian family said they would head up trail to cross back over the bridge. From there they planned to walk to the top of the  Rim Trail where their car was parked.  I gave their daughter one of my chocolate bars,  since she seemed nervous about going back.  “See,” I said, ” its tucked safely in a plastic bag so it will stay nice and dry all the way back. You and the chocolate will be fine.”  She gave me a give smile and her dad mouthed a silent “thank you” as they headed out.

The older hiker and her niece asked if I would take some pictures of them with their phones before we hiked down. It turns out  inspite of growing up in the area, this was her niece’s first time hiking the Treman park trails and she was taking the storm in stride, even enjoying the excitement.  The rock cliff is a frequently photographed backdrop and the tier of slate shelves and flat rocks below the trail wall is a popular picnic spot, in drier conditions of course. 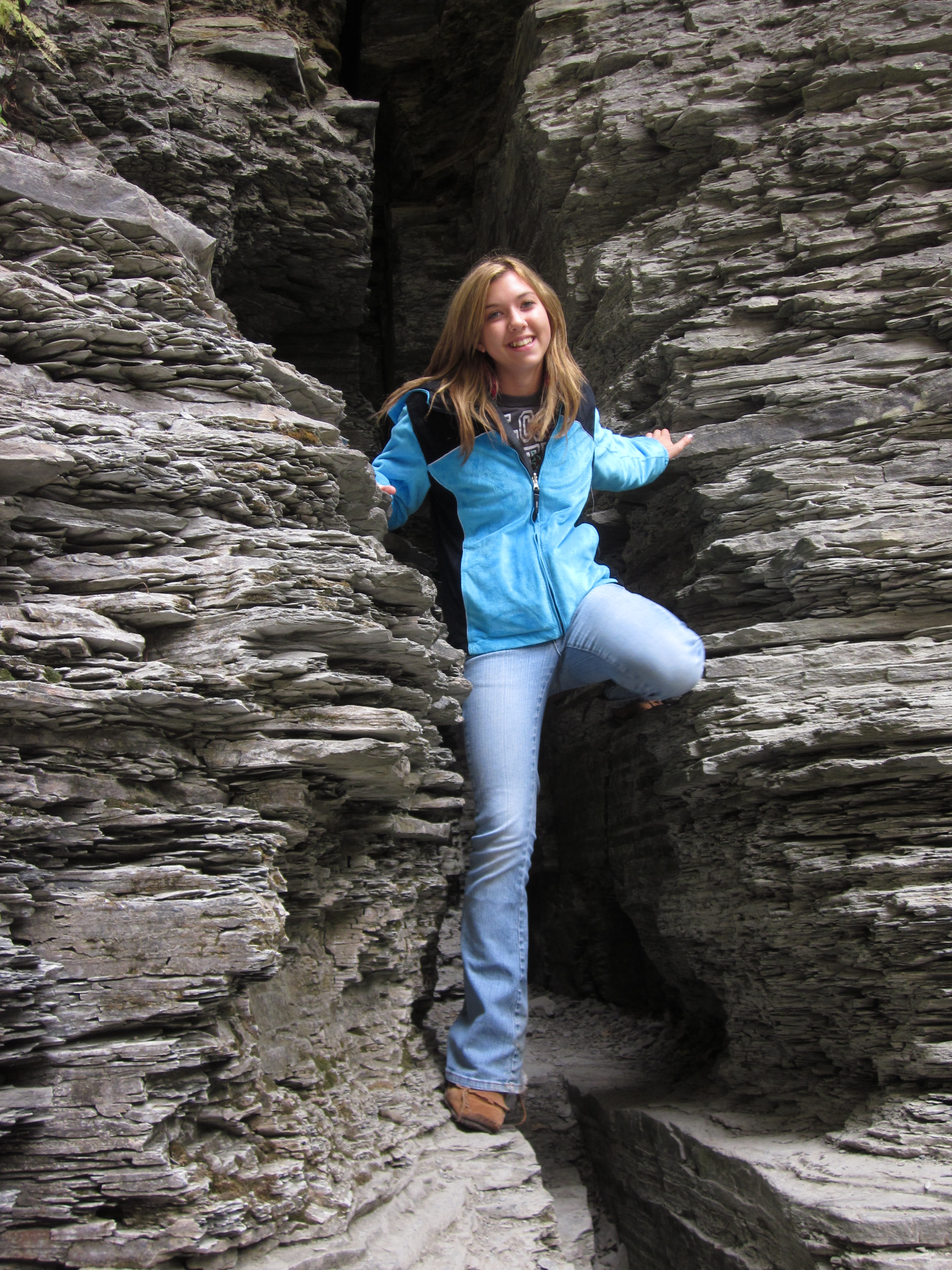 My daughter Emma at one of the photo spots along the rock cliff, on a previous ( and much drier hike ) in 2012.

Mindful of the rapidly moving clouds overhead my fellow hiker and I urged her niece to wrap up the photo session quickly.  It is interesting how like minds can communicate with a simple look and nod of comprehension. We tucked our phones safely into our packs and threw on our rain jackets quickly, but not quick enough.  A flash of lightning so close we could hear the electric crackle of impact with an ear splitting crash of thunder held us in our tracks. My new friend and I exchanged glances, set our packs back on the rock ledge and leaned against the wall as the next torrential assault poured down from the skies.

For the next quarter hour as the new storm raged, we watched the river swell while we talked about things other than the weather. I discovered my friend was a native of the Ithaca area who moved to Florida. This was, she said, the first time in seventeen years she had been able to visit. She spoke about coastal kayaking trips and wetland trails, which she said were beautiful in their own way but she had missed the trails of Ithaca tremendously so hiking her favorite trail had been high on priority list.  “If it weren’t for the brutal winters up here, I’d consider moving back.” 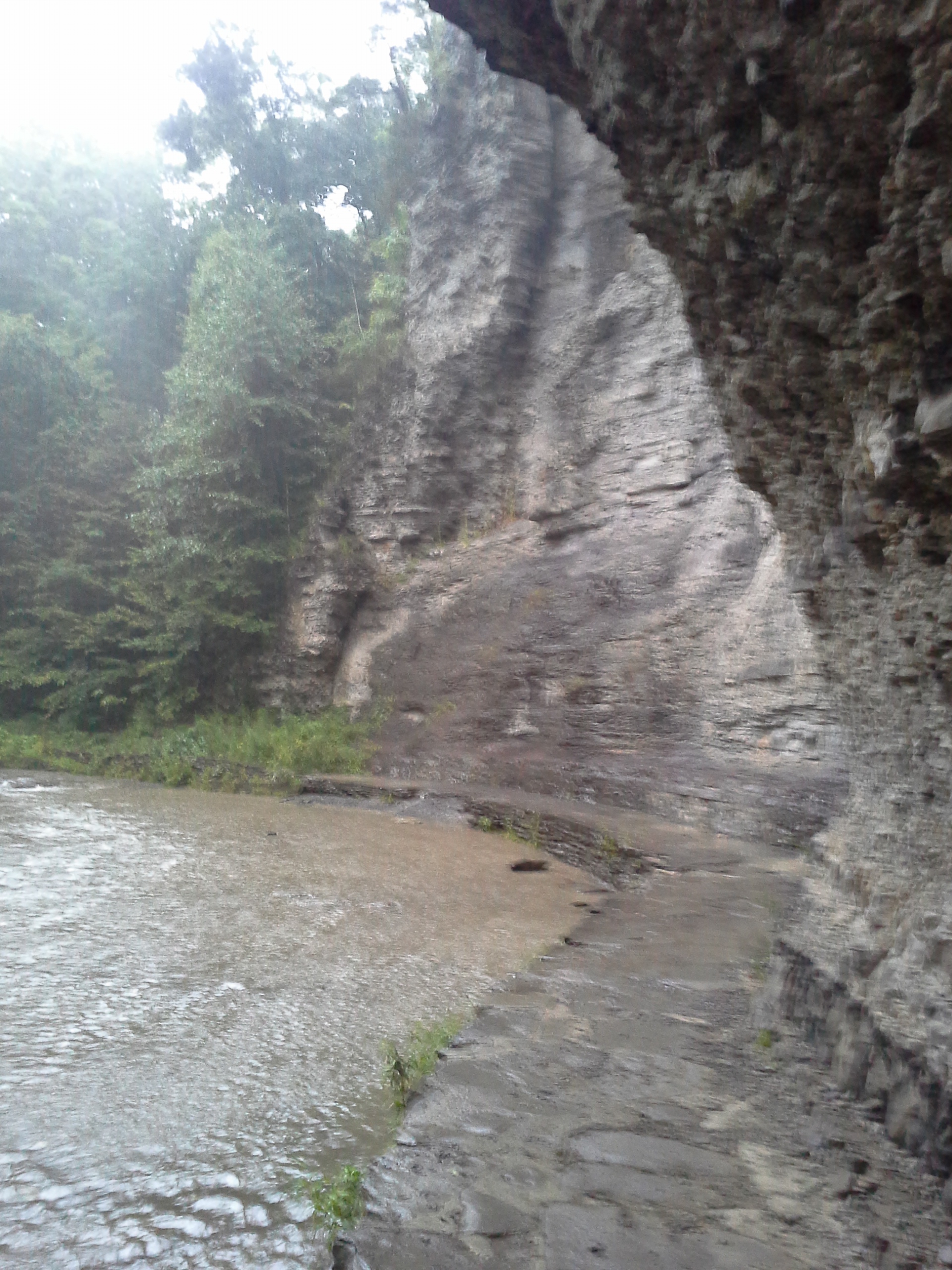 Rising river along the trail rock wall.  Usually there are several wide flat tiers of slate and rock visible below the wall where people can sit.

We fell into a few moments of silence then almost simultaneously commented on the rising water levels. The flat section of trail we were on would flood quickly if the river breached the rock wall along the trail. Looking at the volume of water now surging through the gorge it was clear we would be in danger of being swept off the path and into the river once the water ran over the wall.  But the lighting and thunder had not abated any more than the deluge of rain. Talk about being between caught between a rock and a hard place.  We agreed if the water level came within two feet of the top of the wall we would head down trail.  The odds of being struck by lightning were a better shot than the certainty of being pummeled against rocks by the raging current.  I thought about the Buddha rock and wondered where it’s new resting spot would be.

That’s when we saw a large tree, with roots still gripping a good sized chunk of river bank come tumbling end over end, tossed like a wad of paper by the sheer force of water pouring past us.  We needed no further signals.  “It’s time,” I said and my fellow refugees nodded in silent consent. We stepped out from under the rock ledge urged onward by a fresh cannon boom of thunder. 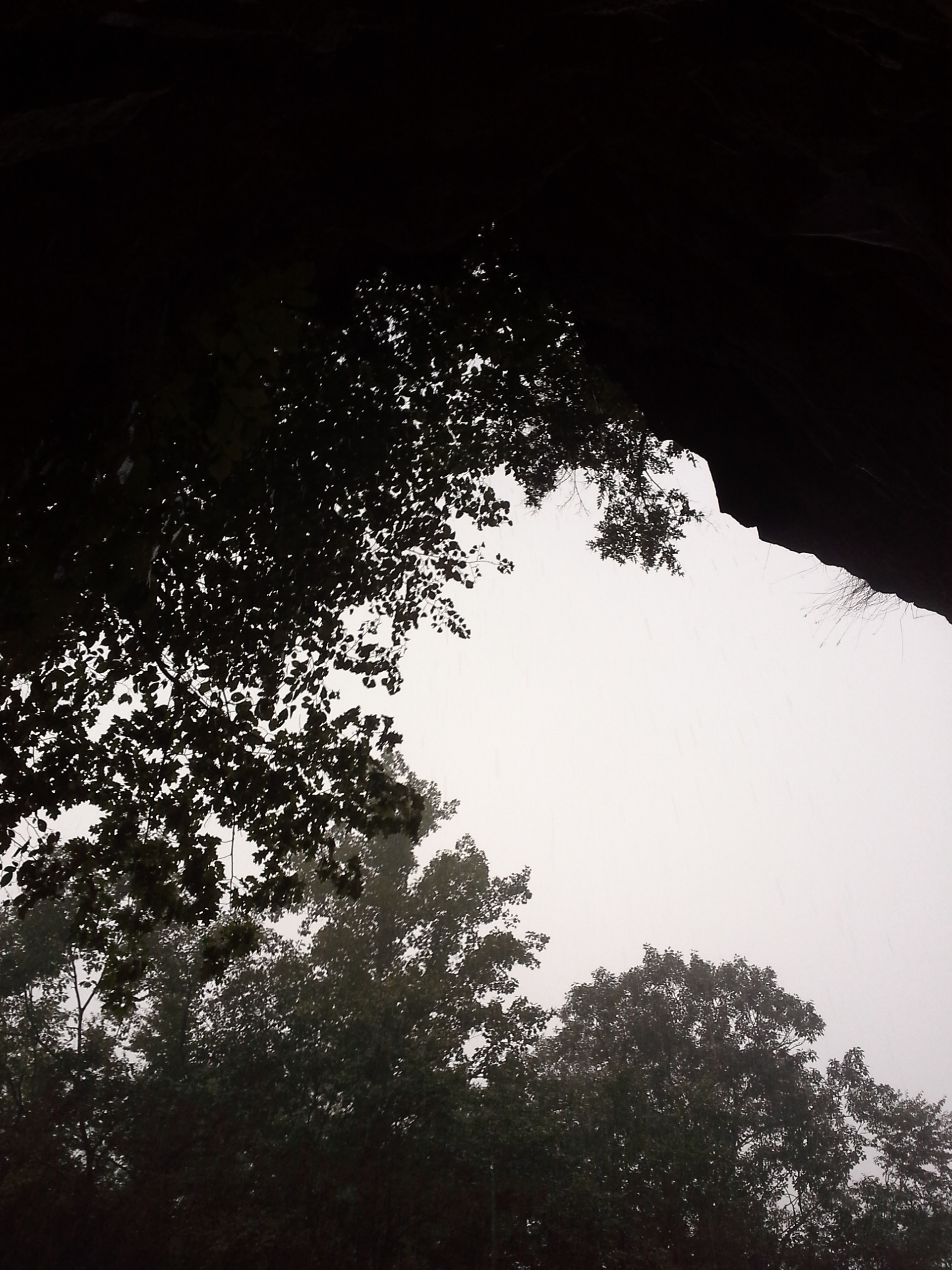 Looking up at the rocky overhang which gave us shelter along the rock ledge.