So fellow travelers, I sign off my entries with ” may adventure find you ready.”  It’s time to walk the talk and prove actions speak louder than words.

Living in Upstate New York, I am not a stranger to hiking in changeable weather.  Summer storms tend to move through quickly but often bring heavy rains, so I made some preparations, packing a rain jacket, extra socks and securing  my cellphone in double ziplock bag in my day pack.

I also chose to leave behind some treasures too valuable to risk getting drenched; my dslr camera and Sammy would remain at camp. Confident in the timing of my trek and the forecast, I set out on the Rim Trail, stopping by the swimming area at the lower gorge to grab a few snap shots with my phone camera. 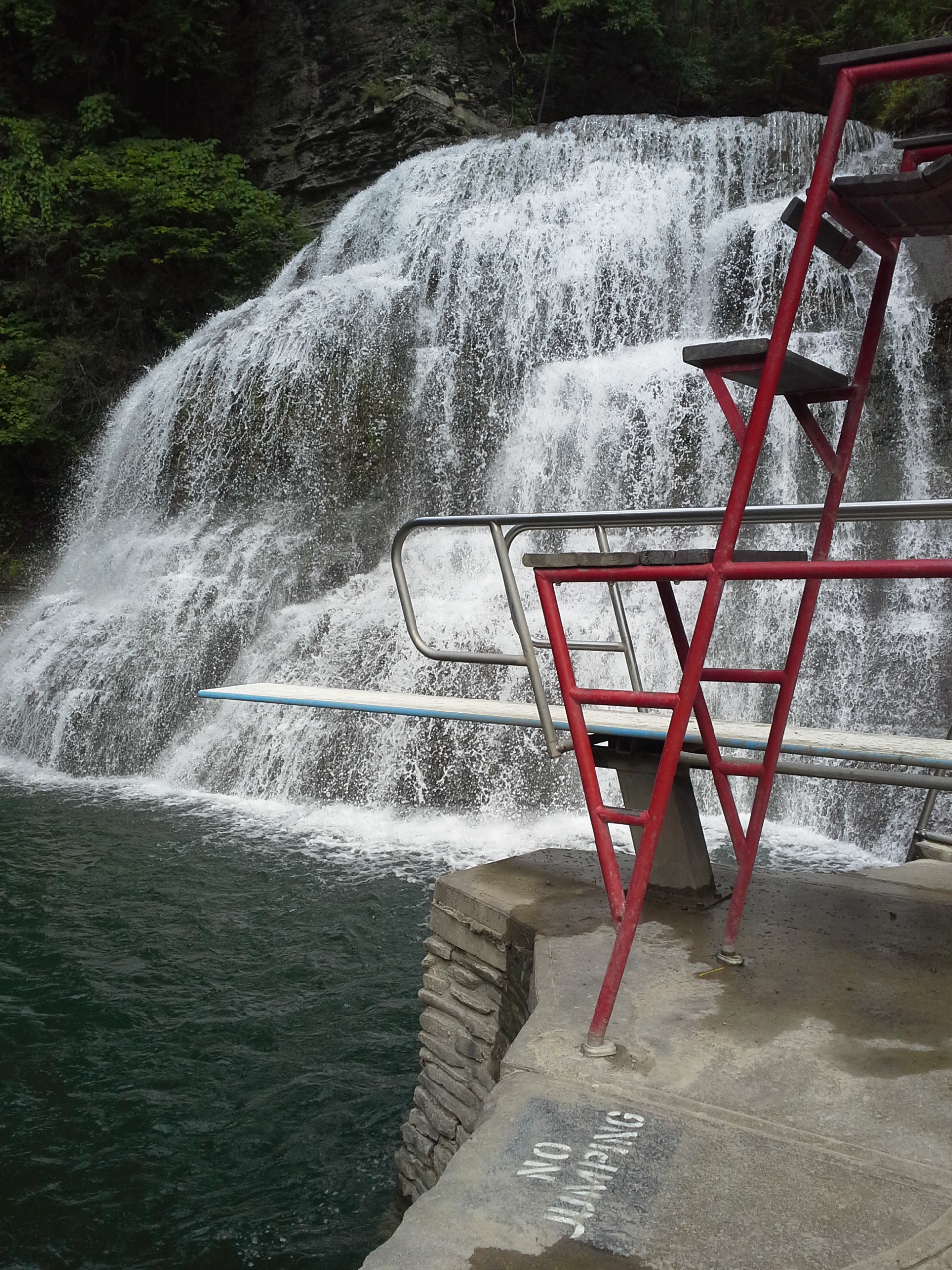 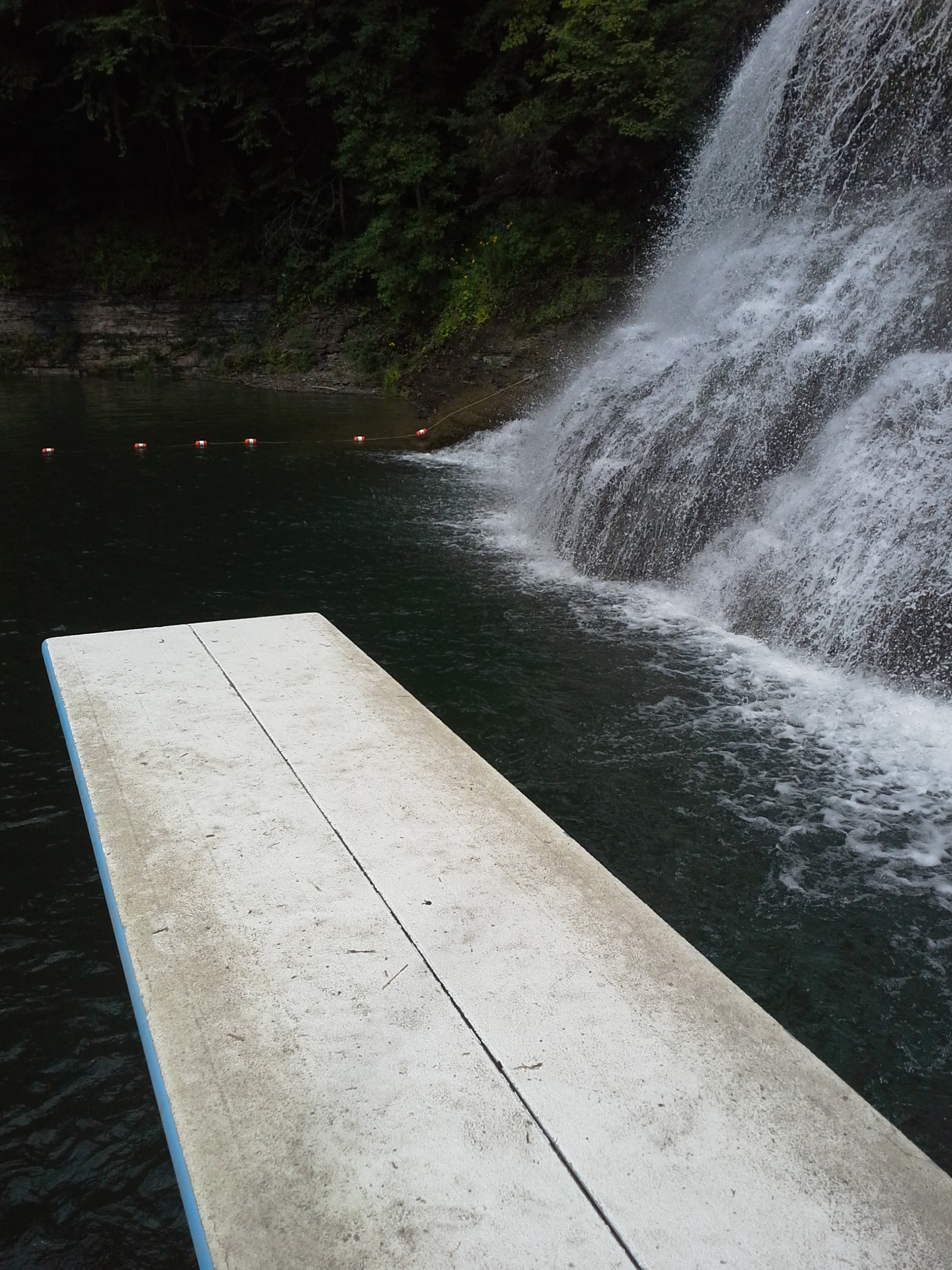 The Rim Trail tests hikers early with several steep sections and only one good view of the lower gorge before it winds away from the river and into the deep, buggy woods. 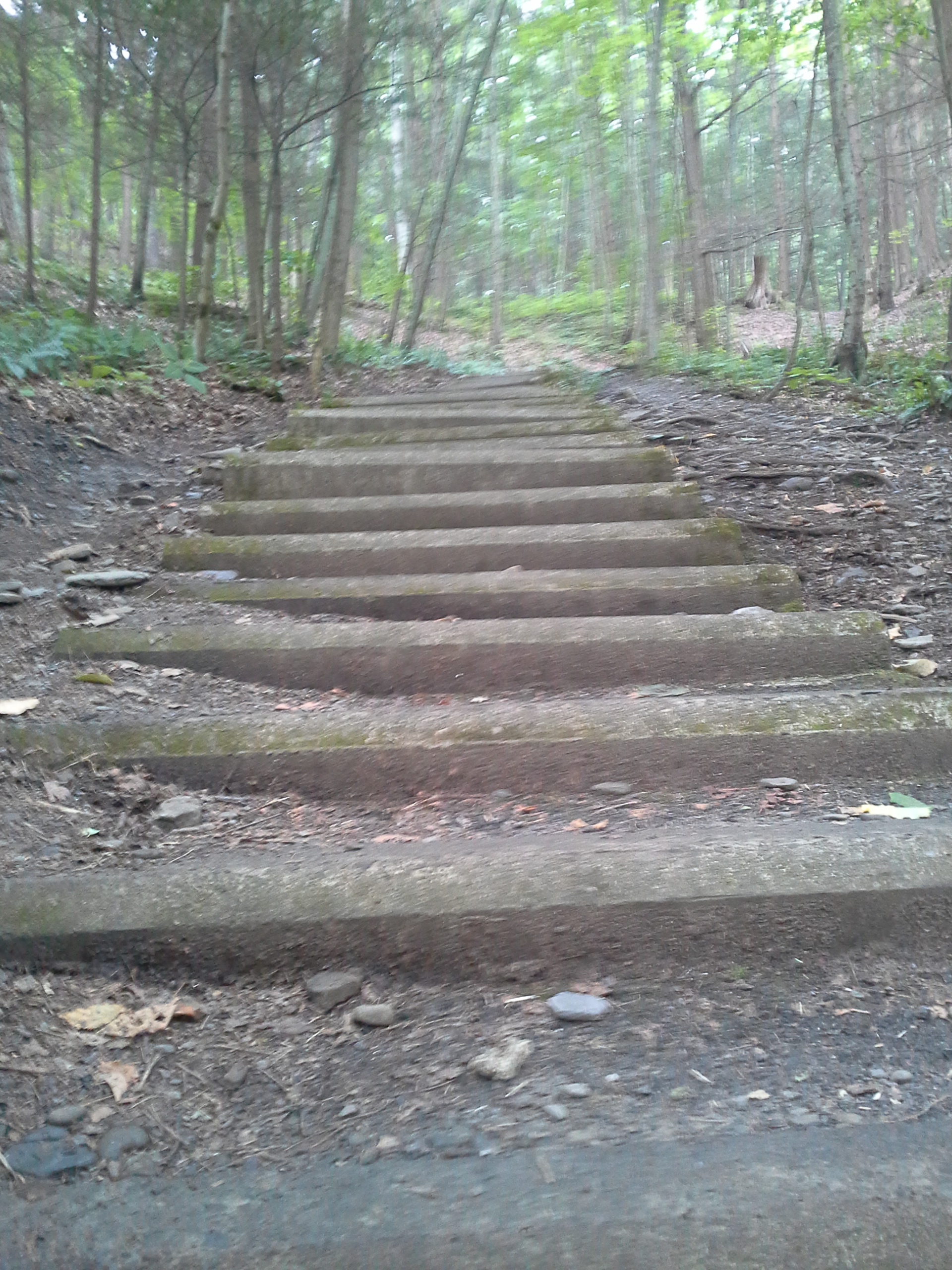 Still there are always points of interest, like the Jesus Tree, so named for a poem it inspired. 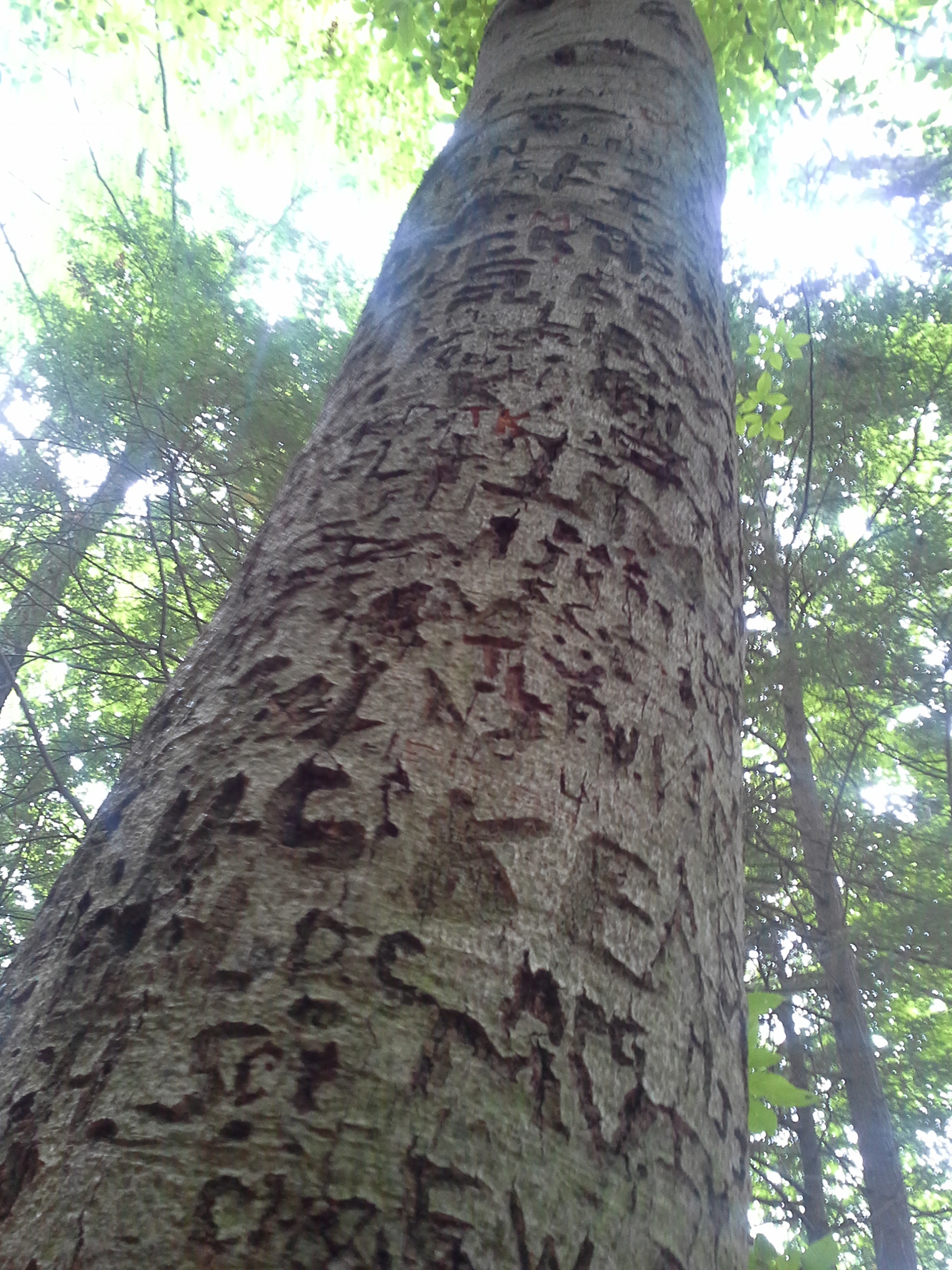 Several hikers passed me along the trail, traveling in both directions and well spaced distance markers kept me informed of steady progress. So when I heard a distant rumble of thunder at the 1.5 mile marker I only hesitated briefly. I was just past halfway up the rim trail.  If  I turned back now I would end up hiking almost two thirds the entire trail distance without seeing any of the Gorge Trail highlights.  The Rim Trail was just beginning to wind closer to the river and just ahead I knew there were several spots where side trails provided easy access to the river.  I decided it to keep going as long as I didn’t hear more thunder and within a few minutes I spotted the first river trail to my right. So far, the thunder remained a lone wolf call and as I dodged through the small trees I spied an enticing photo op, a spot which also inspired a Haiku I called Buddha Rock. 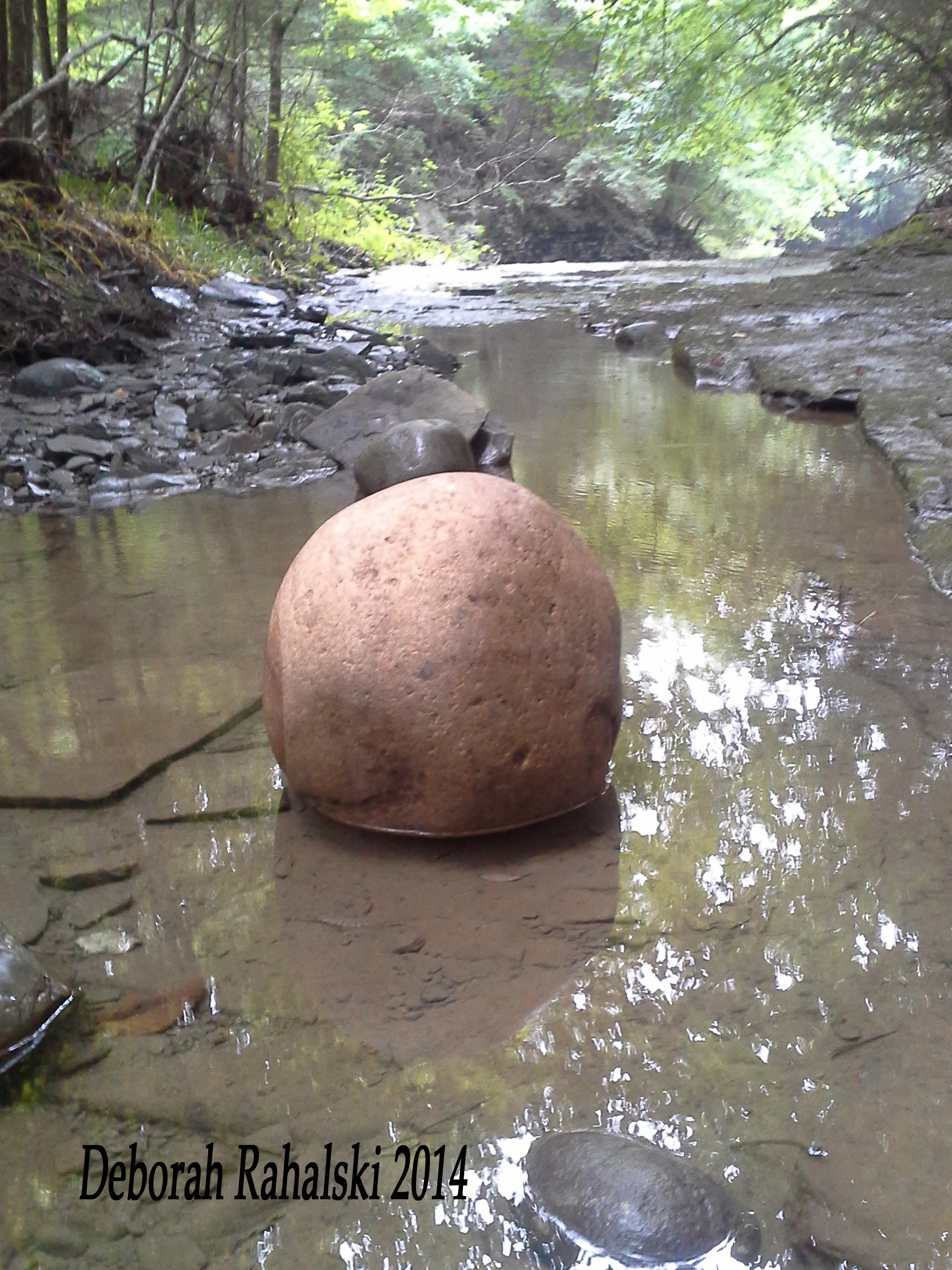 It proved challenging to get the shot I wanted, prompting a few moments of regret as I thought of my dslr sitting on the table in the camper. It did occur to me that the shallow gravel beds I crouched on to find the right light to snap a few shots with my phone camera would easily flood with a few minutes of heavy rain and the clouds overhead were considerably heavier than when I started out.  I moved further up the river, where the flat rocks provided a good resting spot.  I had planned to eat lunch at a favorite spot along the Gorge Trail a little later, but I decided to eat before crossing the bridge.  Although I still had not heard anymore thunder, the wind was picking up a little and anyways I was getting hungry. 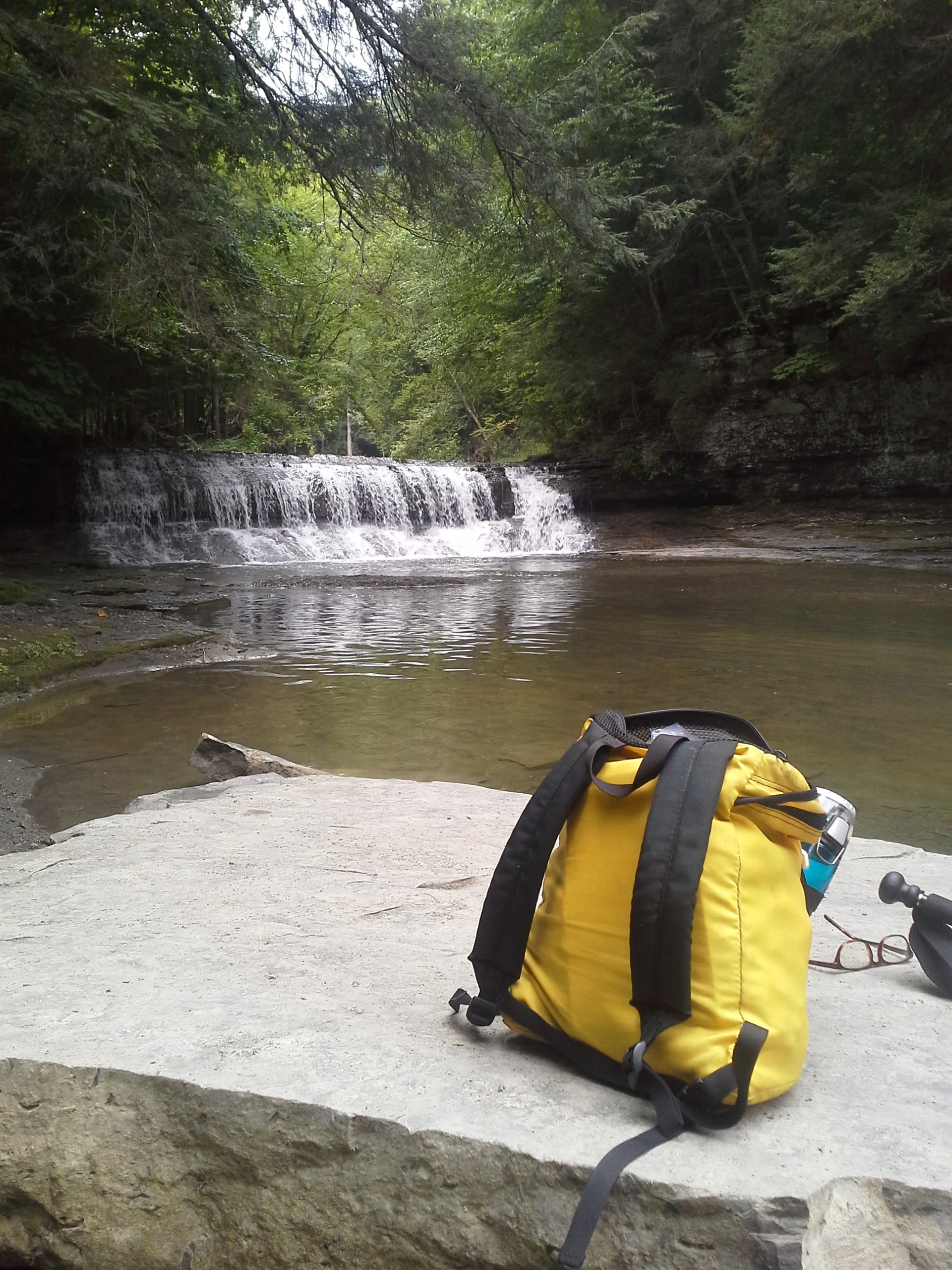 I was rewarded for my choice of dining location with several nice bird sightings, including an inquisitive merlin who watched me from a dead tree stump just across the river. He took off seconds before a loud rumble of thunder rolled through the gorge.  Time to get moving and no second thoughts about turning around.  The crossing bridge to the Gorge Trail was less than a quarter mile ahead and that was the trail I would rather navigate in heavy rain.

Ah, one should be careful what one wishes for.