So fellow travelers, yesterday was one of those days when the stars aligned to make an impossible schedule suddenly possible. A slight change in the crew schedule for this week’s Drumline competition allowed me to head out to the rescue first thing in the morning to honor the memory of a rescue angel who gained her wings this week.

I met Laura Paradine in November 2010, when my daughter and I attended a volunteer orientation.  Her love for the dogs at the rescue radiated from every inch of her welcoming smile.  In the most difficult periods of chaos that came with the various stages of the rescue’s growth she was often the one person who could give me the words of encouragement I needed to keep going. 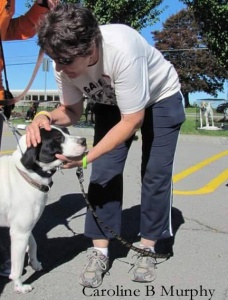 From my years of rescue experience I have learned when faced with the worst cases of suffering, asking “Why?” is often a futile waste of valuable energy.  I have learned instead to ask “How?” and look for the ways I can make a difference. If I  cannot help directly with one situation, I find similar ways to help.  “We do what we can and when we can we do more,” Laura used to say to me.  I wrote those words on the inside of my training binder; they kept me going as we struggled to find ways to organize some kind of volunteer program.

When Laura was diagnosed with ALS (Lou Gehrig’s disease) we were stunned, especially when the condition progressed with merciless speed.  She faced her fate with the same passionate faith and courage we saw so often at the rescue. Her friends rallied, making it possible for her to visit in her wheelchair and later when that was not an option, by bringing dogs to visit her at home. The staff began to notice that dogs who visited with her soon found their homes, even ones who had been waiting a bit longer than usual to be adopted. It happened every time so when she told her friends she felt she was surrounded by Angels, the staff at the rescue began to speak of “Laura’s  Adoption Angel miracles.”

I know I was not alone in spending some evenings in tearful prayer battling the anger that rises when life seems so heartless and unjust. Laura continued to face the inevitable with dignity and courage. When she died earlier this week, the rescue’s Facebook page featured a tribute to her written by our amazing director.  It opens with these moving words:

“The best kind of people are those that believe in something so passionately they make you believe too. They make you see sunshine where only clouds had been and you become a better person for having known them.  They are the hardest to say good bye to, even when their passing means they are at peace and free from suffering.”

Yesterday the rescue received one of the largest transports to date.  Close to sixty dogs from wiggly little puppies to big shaggy adults were welcomed by eager volunteers as the rest of the morning crew walked the dogs already in house. After quick relief walks, the new dogs ate breakfast, received id collars and after a longer walk, snuggled into crates and pens with fresh bedding and a toy. When the morning shift wrapped up there were a total of eighty-three dogs in house waiting for their new families to come through the doors that would open at noon.

Our Angel Laura is gonna be busy. 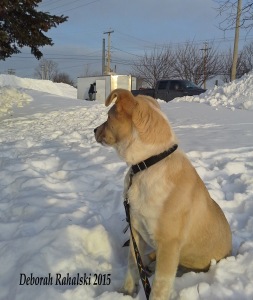 Walk gently upon the path my friends and may adventure find you ready.