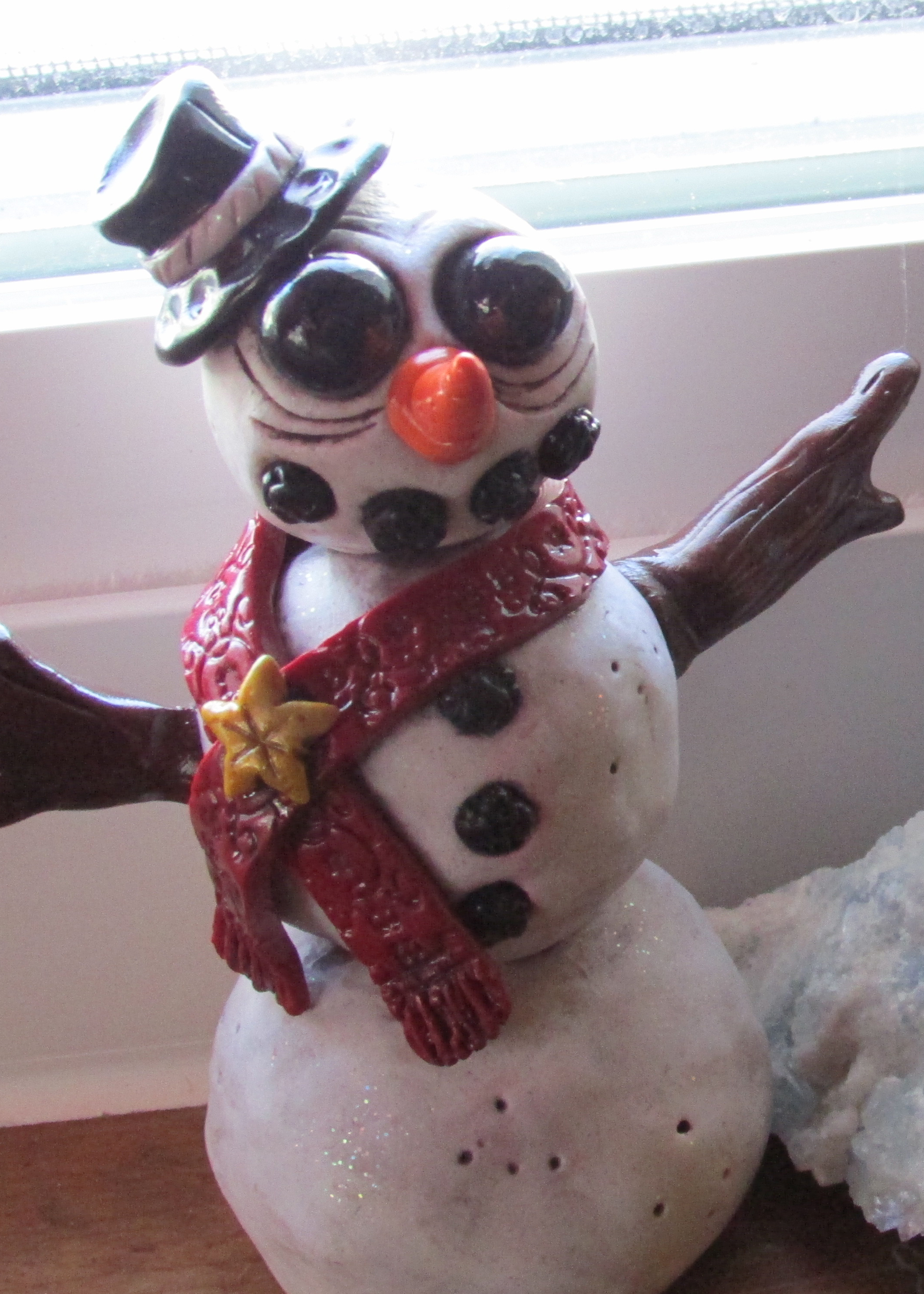 Jack, as you may have noticed is no ordinary snowman.  Jack is in fact a ZOMBIE snowman.  I owe his presence in my life to the muse of a fellow Bedlam Farm Creative group member.  Meet Zombie Pig 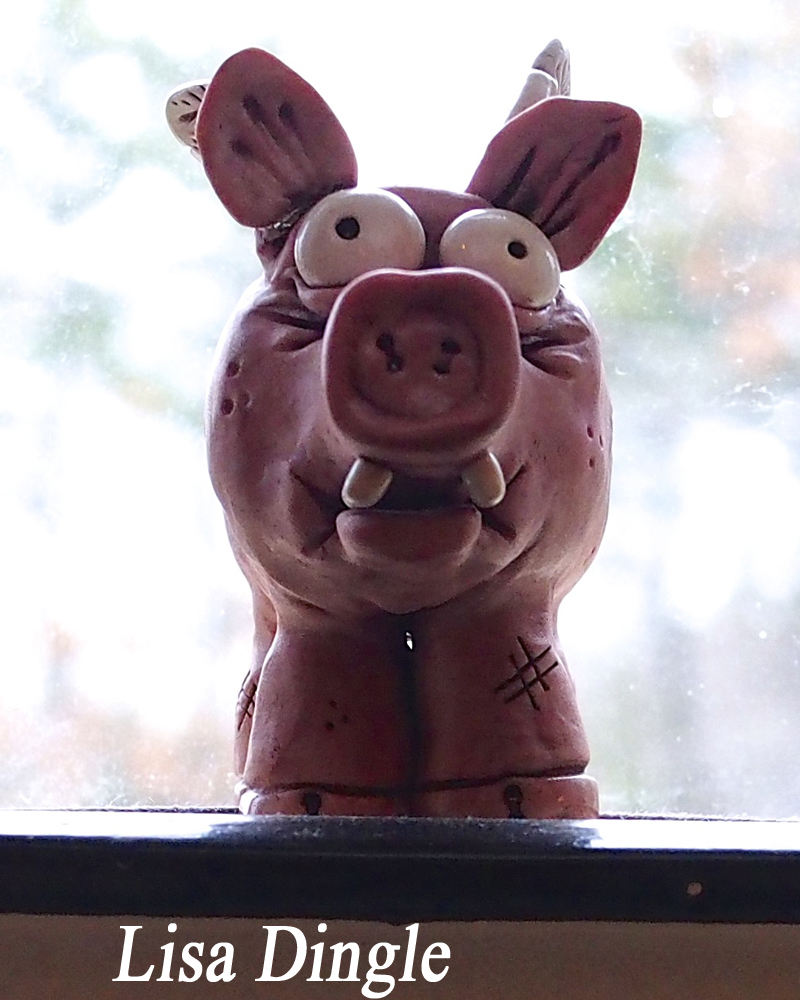 ZP’s story can be found in Lisa Dingle’s highly entertaining blog ( justponderin.com/2014/01/14/on-the-tale-of-zombie-pig )  He’s a frequent flyer on the OGFBF wall.  Making the impossible, possible….pretty darn awesome.  So I thought I’d check out the creative source of his awesomeness  ( www.etsy.com/shop/mirandascritters ) and I found Jack. Serendipity because my current sentiments towards winter run something like this meme floating around on Facebook. 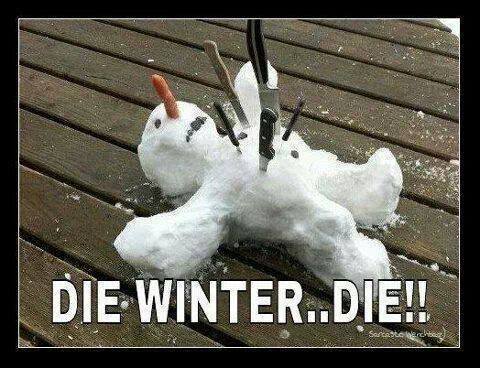 Normally I am a fairly nonviolent person. Stories of my temper are, I can assure you, greatly embellished. I am a bossy big sister, the eldest  and after all someone had to keep order from spiraling into chaos. I would no more stab an innocent snowman with kitchen implements than I would kick over a cardboard box containing my hidden youngest brother or slam anyone’s fingers accidentally in a car door.  Besides, years of t’ai chi, yoga and meditation have mellowed my reactions.  I generally seek the path of least resistance these days.

Still, winter is beginning to get to me this year.  The dead snowman meme prompted a series of nightmares enhanced perhaps by my daughter’s The Walking Dead viewing marathon which began during our most recent snowday.  Key words here: most recent, because prior to January, our school district had not closed for snow or cold in over two years. Bear in mind, I live just outside Syracuse holder of the Golden Snowball Award for every year but one since it’s inception. Lake Effect is our cultural icon.  The running joke was that hell would have to freeze over before our district would call a snowday. So at least for believers in Central New York, yes, hell froze over on January 7th. ( It could have happened a few days earlier, but our school district was still on Christmas Break during the first round of closings the week before.)

So hell freezes over on January 7th, then again on January 22nd  and then AGAIN on February 5th.  Never mind that the first two closings were due to sub zero wind chills; closed is not an hour delay, closed is not a two hour delay, closed is CLOSED.  Three snow days in less than one month might just signify the beginning of Armageddon.  Hence the apocalyptic nightmares in which banks of snow covered even the second story windows, blocking all doorways and yes, neighborhood snowmen became zombies….and then I found Jack. 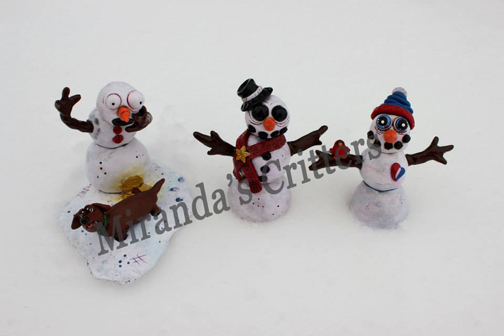 There is something cathartic in discovering someone else’s creativity has given life to your own visions, as nightmarish as those visions might be. It is a reason I have always been drawn to certain poets, authors and musicians.  Their words give voice to things I felt which, when expressed so beautifully, became less painful.  Perhaps the pain is greatly dispersed when shared. Certainly it is eased when laughter is added.  Laughed right out loud I did when I found Jack.  He was the perfect embodiment of my fear this winter would swallow me whole, burying my spirit in a cold, joyless mound of depression.

Now he sits on my desk reminding me to look fear in the eye, laugh and say “bring it on,”  I haven’t gone under just yet.

And remember  “When you come to a fork in the road, take it.” Lawrence Peter Berra.