So fellow travelers, I am about to uncharacteristically ignore 90 percent of everything I know to do when hiking.

We arrived in good time at Tillamook Forest Center, greeted by the old fire tower, 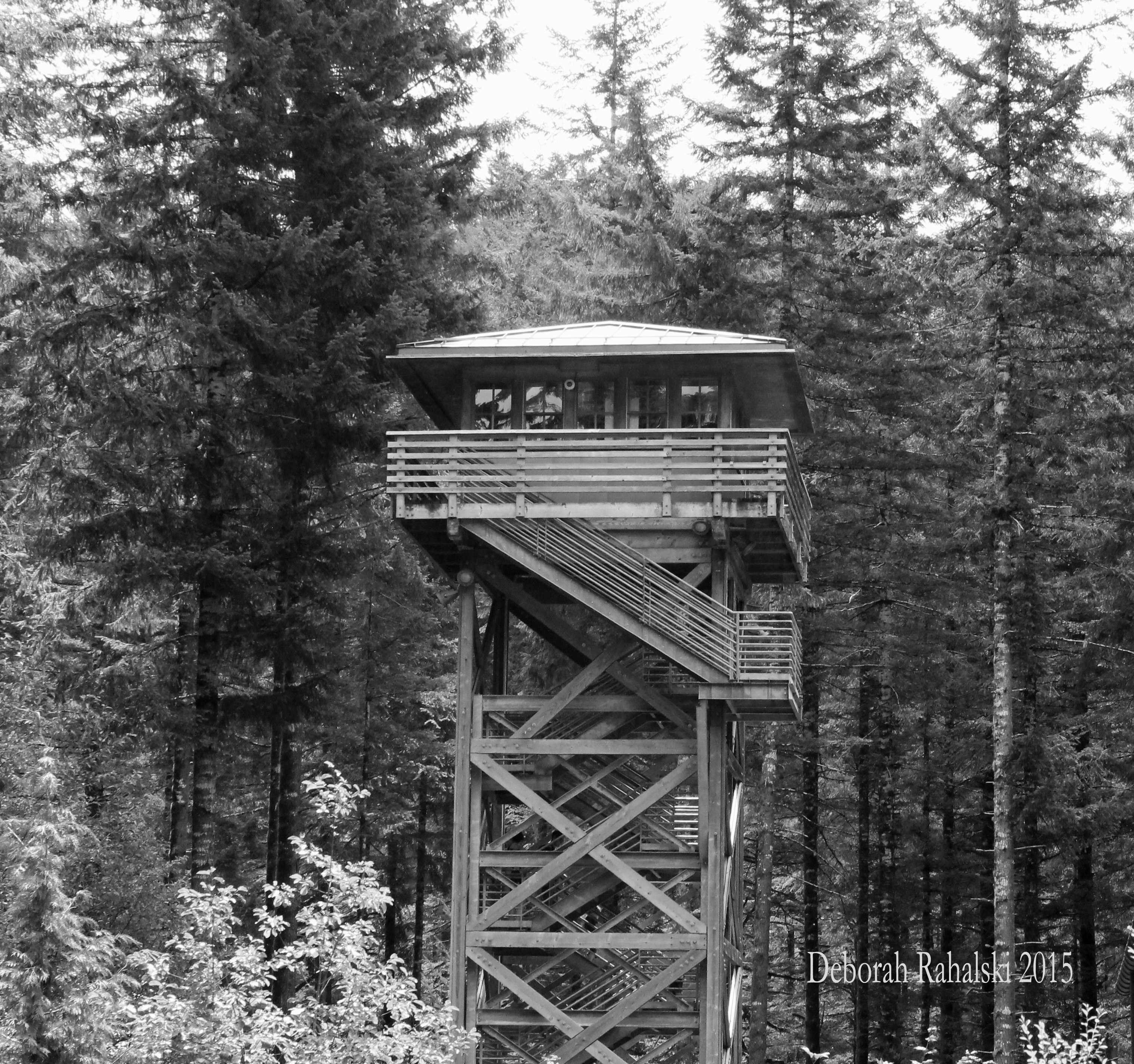 which actually has a live webcam mounted on it so people can check on their favorite forest view anytime online. There’s also a webcam of the suspension bridge which leads from the center to the main trail along the Wilson River.  (The webcams can be found at the forest center’s website here. Go ahead, check out the views.  Trust me, we’ll still be on the trails when you get back.) 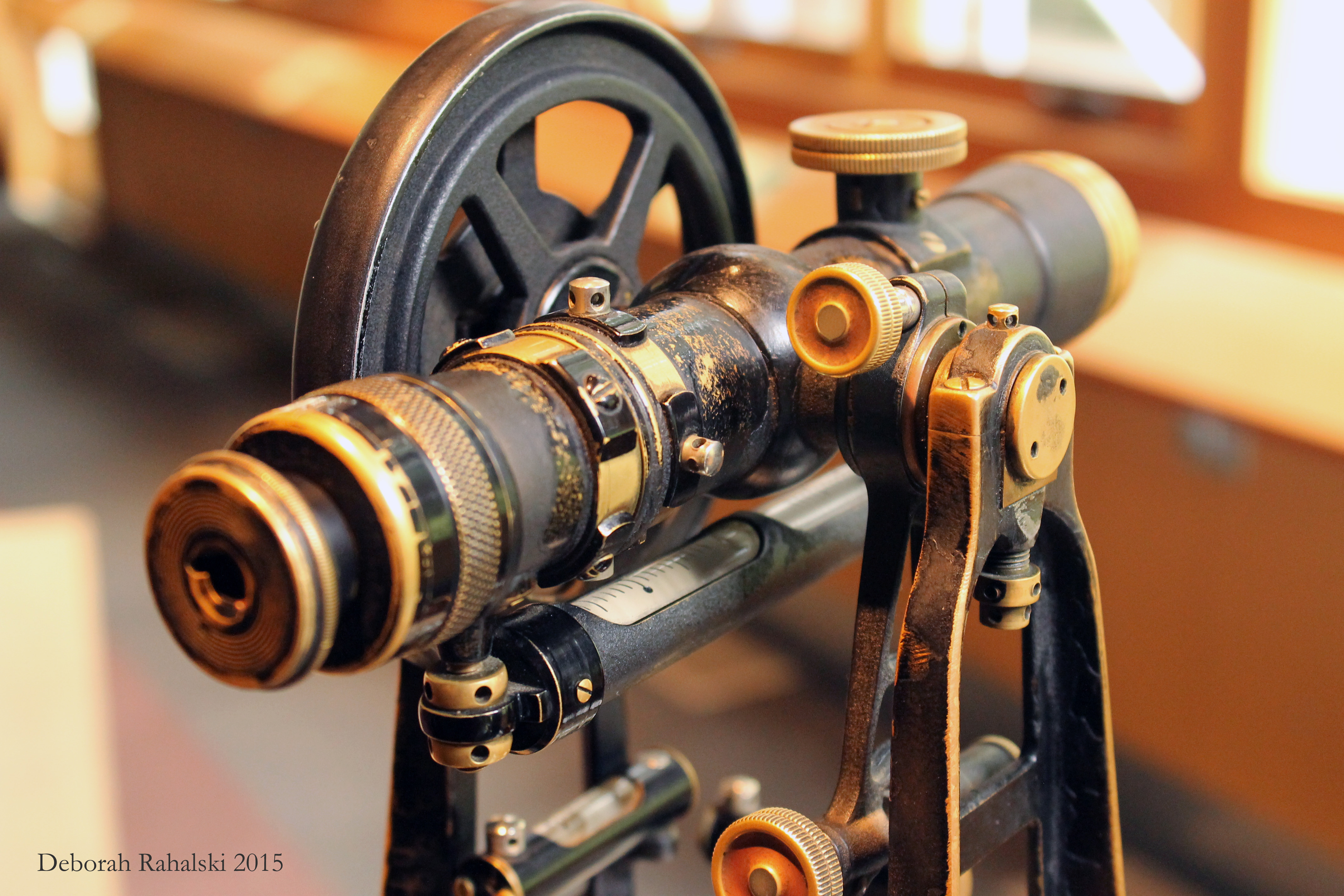 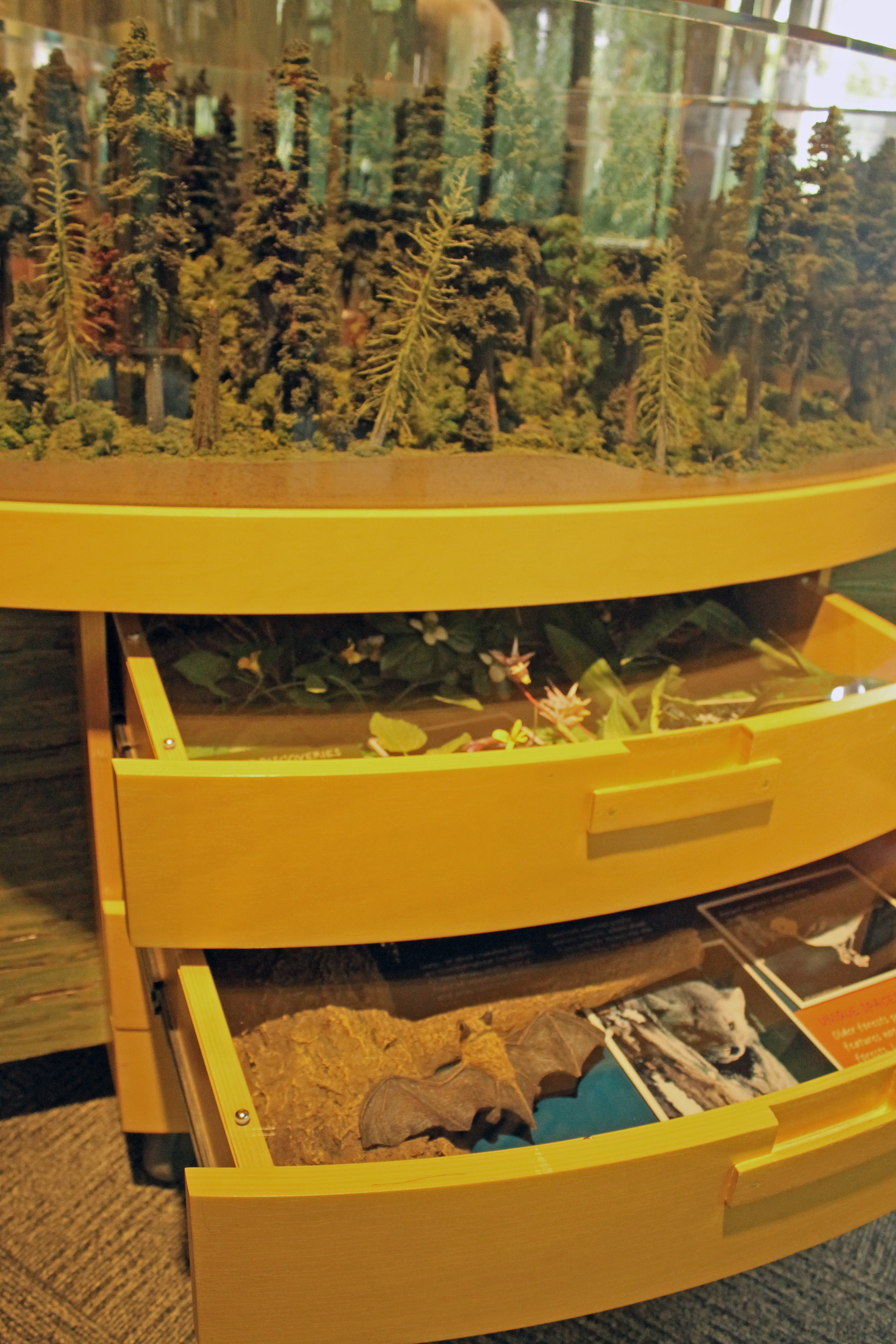 This display made clever use of pull out drawers in rows around the table topped by a model of the forest. The drawers covered various topics of natural history, flora, fauna and just plain cool stuff to see. 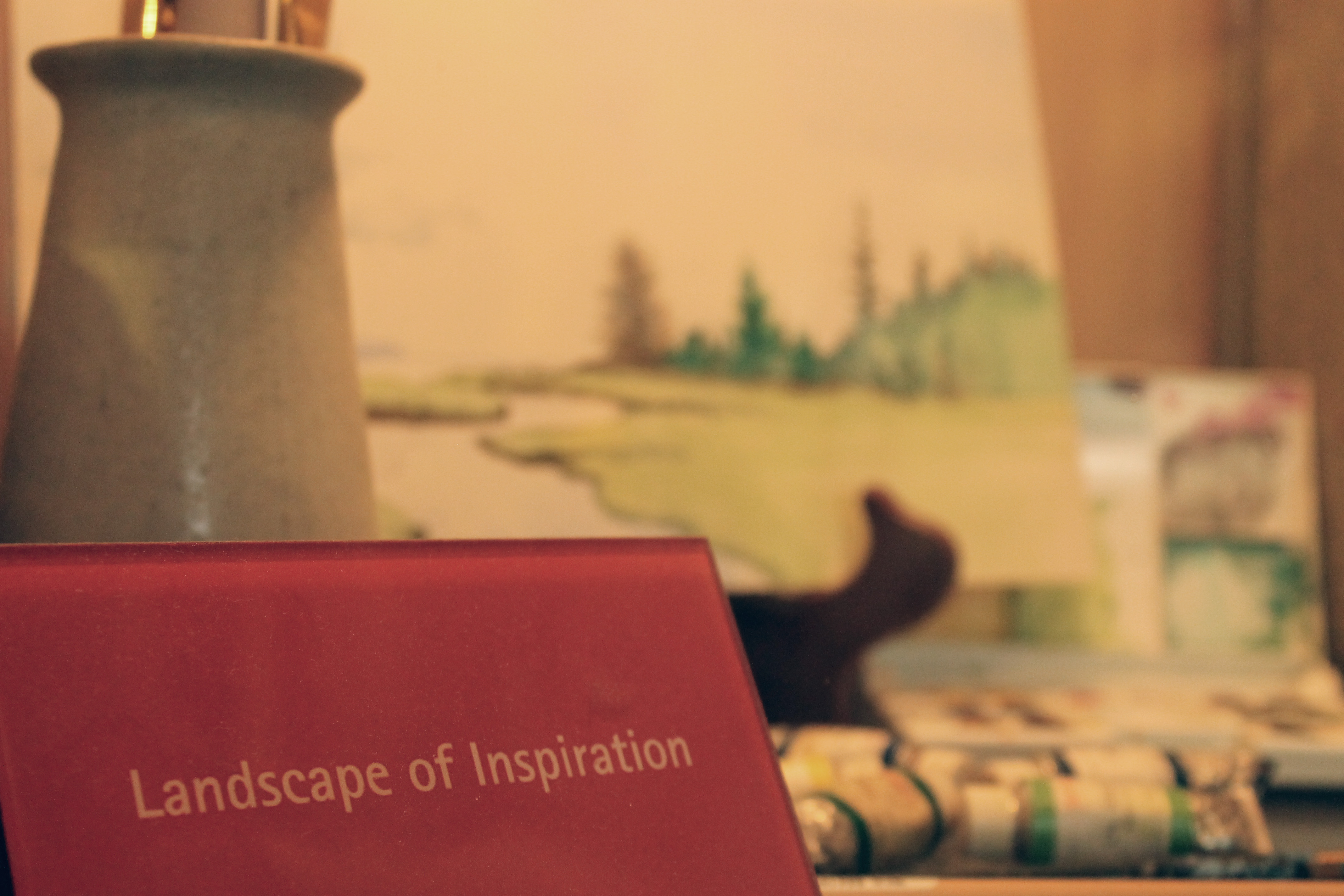 This display about the art inspired by Tillamook Forest made me think of the many talented artists in the Bedlam Farm Creative Group and imagine the wonderful drawings, paintings, quilts and batiks they would create.

We could easily have spent a few hours in the building itself, but we wanted to hike at least one of the trails into the magnificent forest before heading to the beach for the afternoon. After consulting briefly with some of the staff we selected the 1.3 mile trail to Wilson Falls as our intended destination.  There was a very basic, not to scale drawing of the trails around the center on the back of the brochure I picked up at the main desk. The trail we were taking looked very straight forward, a simple out and back path which branched off the main trail along the river. 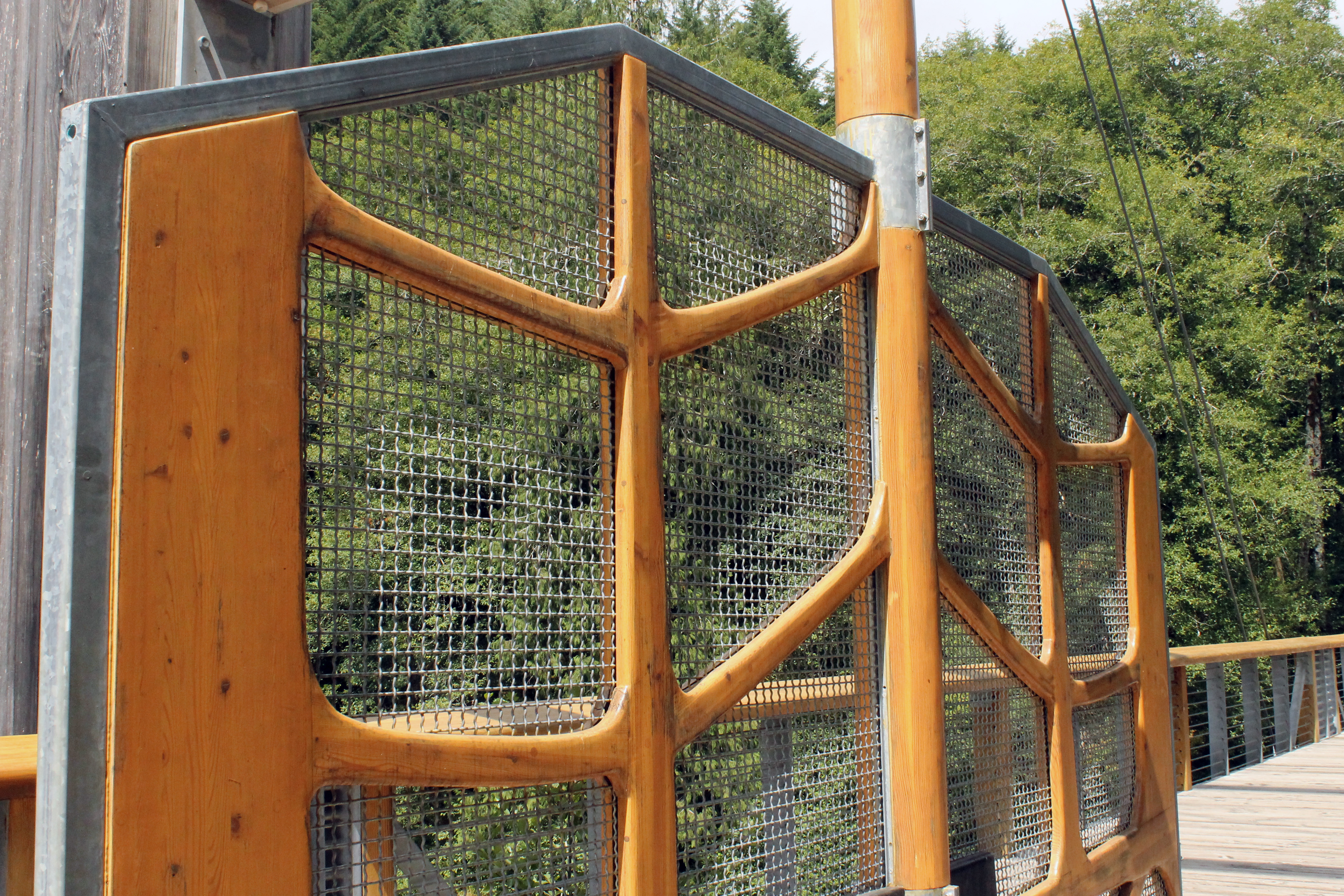 As we passed through the impressive gate of the suspension bridge which stretched over the Wilson River I wondered if we should grab some of the snacks and water we had packed for the beach.  Portland had been setting some record temps this summer; it was hot and it had been a few hours since we had eaten breakfast.  Everyone else had already crossed the bridge when this thought occurred to me.  The hike was supposed to take a little less than an hour. We had at least two water bottles with us and I had a small bag of trail mix.  We’d be fine until we got back to the car. 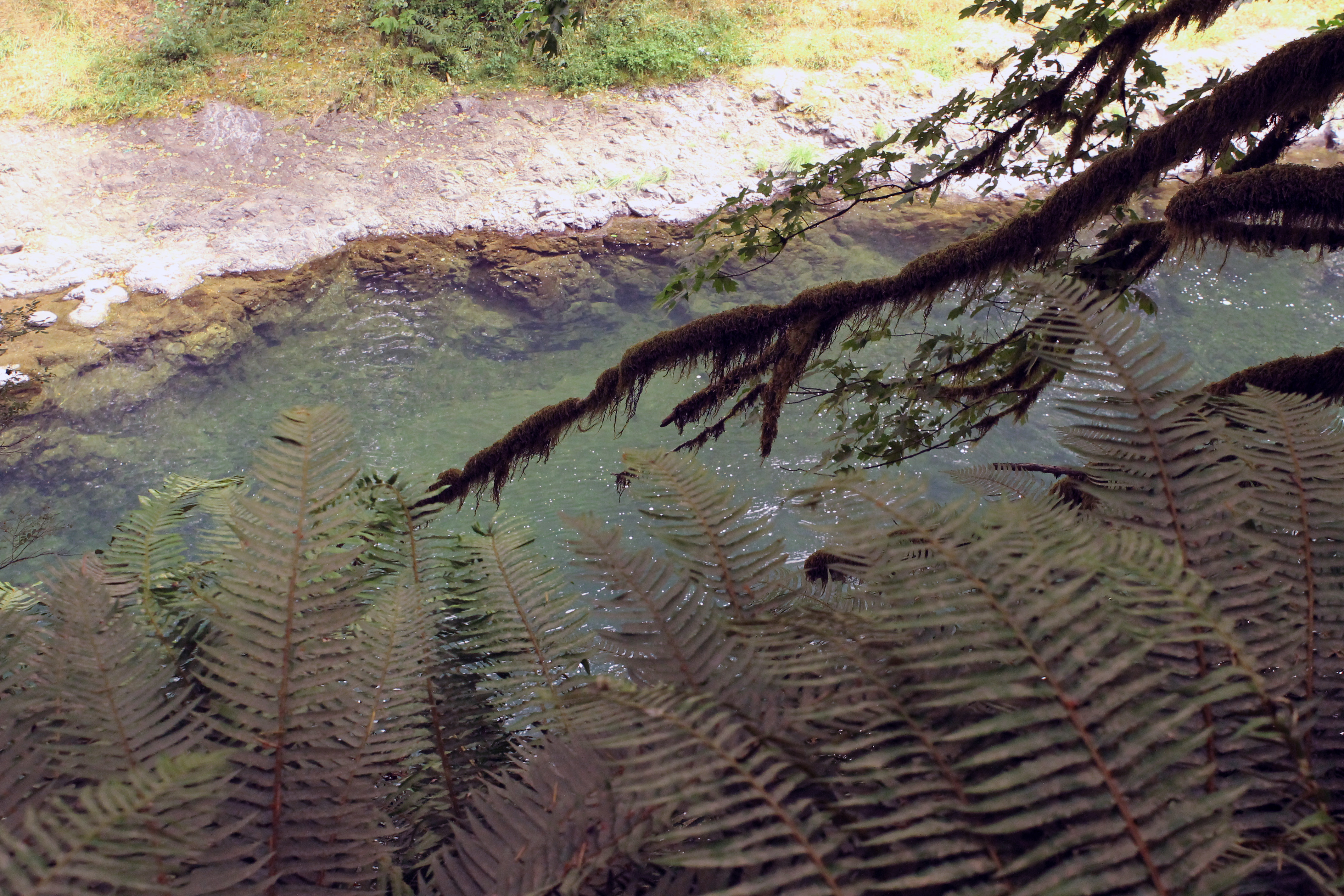 The trail traveled along the river mostly in the shade of tall trees draped in green moss.  There were several places where side trails lead right down to jade green pools in the river. I shot lots of photos and my son-in-law made note of all the great places where they could swim when they came back with their dog (our rental car did not have room for a sixth passenger, so she stayed home that day.) Then the trail climbed away from the river and suddenly came out on a road.

Puzzled we consulted the little drawing on the brochure. Hmmmm, no indication of a road on the not to scale map and yet the trail we were on had been one continuous path the whole distance. The only paths leading off the main trail went straight down to the river and back. We searched a little ways in different directions, wondering if the spot across the road where a creek tumbled over some rocks could be the “falls”, but there was no path leading to them and the staff had said Wilson Falls was a popular photo spot. 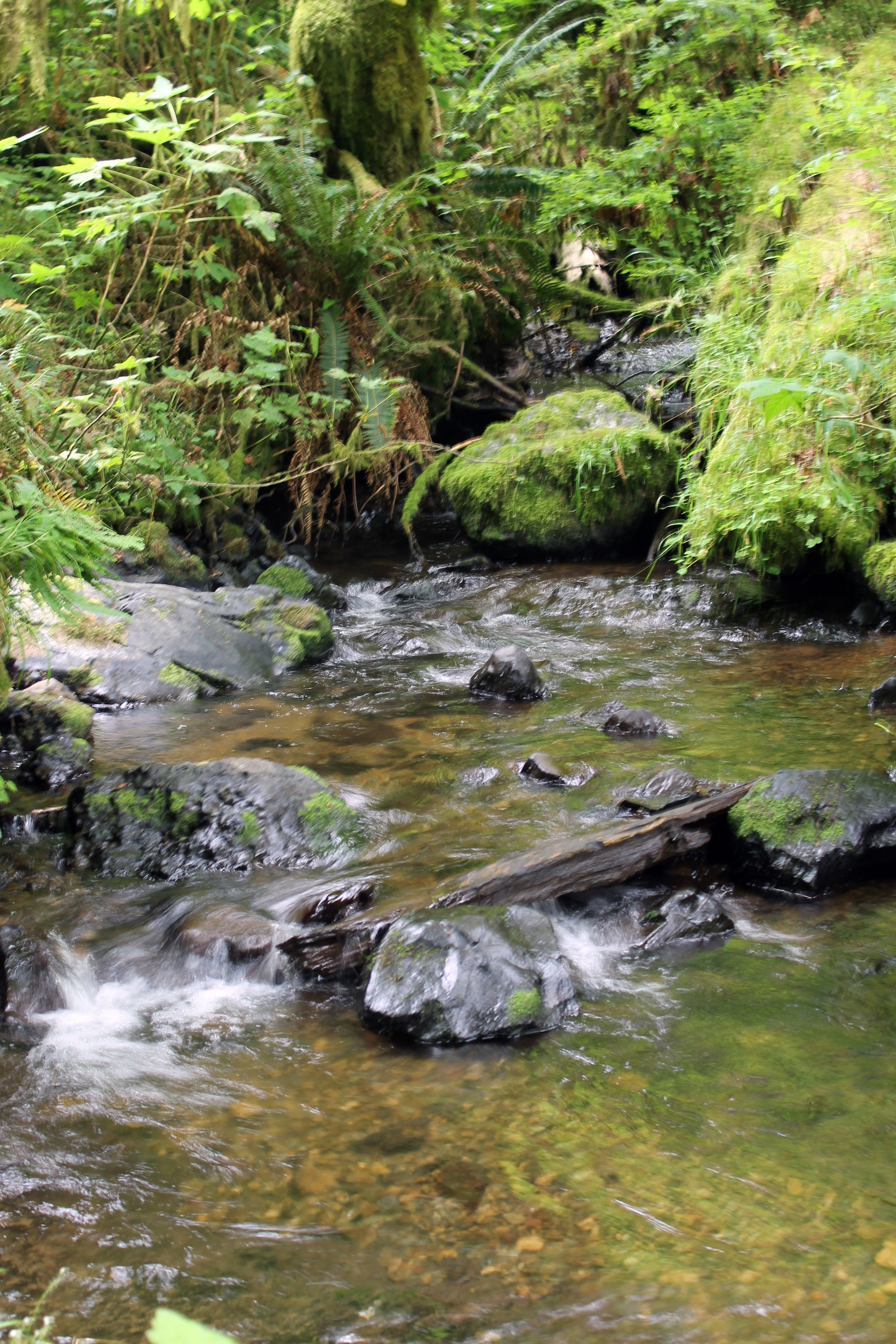 Then as we looked back towards the trail we had come up on, we found a small wooden sign which read “Wilson Falls 1.3 miles’ with an arrow pointing where the trail continued on that side of the road into the woods. Oh, the 1.3 miles note on the brochure map meant 1.3 from where this part of the trail began, not the distance from the building to the falls. We had a brief discussion about how far we had probably hiked and how much longer it would take to get to the falls. No one was inclined to go back just yet, we had only been on the trail for about fifteen or twenty minutes, including the side trip to the river’s edge. If the falls were only 1.3 miles from this point we could get there and back to the car in less than an hour.

While this assumption was actually correct, I made a yet another error by not remembering my husband wears a fitness band which could track our distance traveled. I didn’t even think to make note of the time we set out on this leg of the hike, so we could estimate the distance we had traveled.  Fortunately, we were on a well marked trail, traveled by many other hikers.

So onwards we went, enjoying the shade of deep woods and even snacking on wild blueberries and plump marion berries (Oregon’s native species of huckleberries) once I had assured and demonstrated to everyone these were in fact safe to pick and eat.  I asked one young couple who passed us coming the other way if they had seen the falls.  Yes, they said the falls were less than ten minutes up the trail.

Again I missed the hint to track the time, distracted by trying to identify bird songs made slightly unfamiliar by inflections of the local “dialect.”  Plus there were lots of images to photograph, like this pretty little spot where water trickled down some rocks and across the trail. 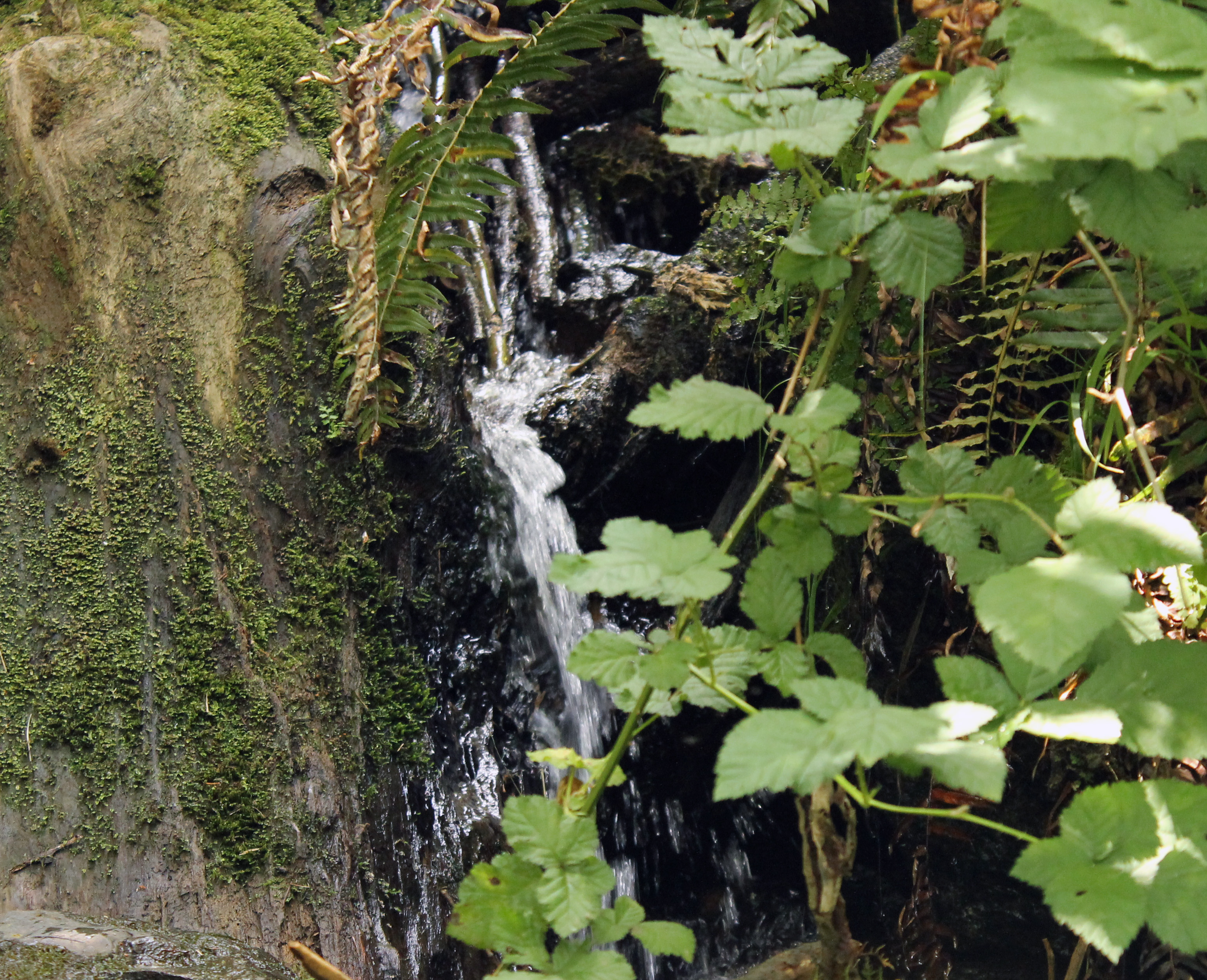 But my photographic exploits put the rest of my family farther ahead of me on the trail, which was also getting steeper as it started climbing away from the river again. My knees were beginning to complain and I had to slow my pace to navigate the increasing pitch without my walking stick, which I realized had been left behind.  This was a really uncharacteristic error as I had taken particular care to remember to pack it in the one suitcase we had checked on the flight to Portland.

By the time I caught up with my family, it was clear everyone else was just as tired.  In the course of figuring out how far we had hiked, I realized the sum total of the errors I had made up to this point. I was particularly upset that I had forgotten we could have tracked our progress with my husband’s fitness watch.  No matter, we had been out on the trail for an hour, which meant another hour hike to get back.  Waterfall or no waterfall it was time to turn around.  No one disagreed.

After passing around the little bag of trail mix and the water we had left, we headed back the way we came.  Lo and behold at the pretty spot where the little creek trickled across the trail we saw a sign we had missed and looking up we saw 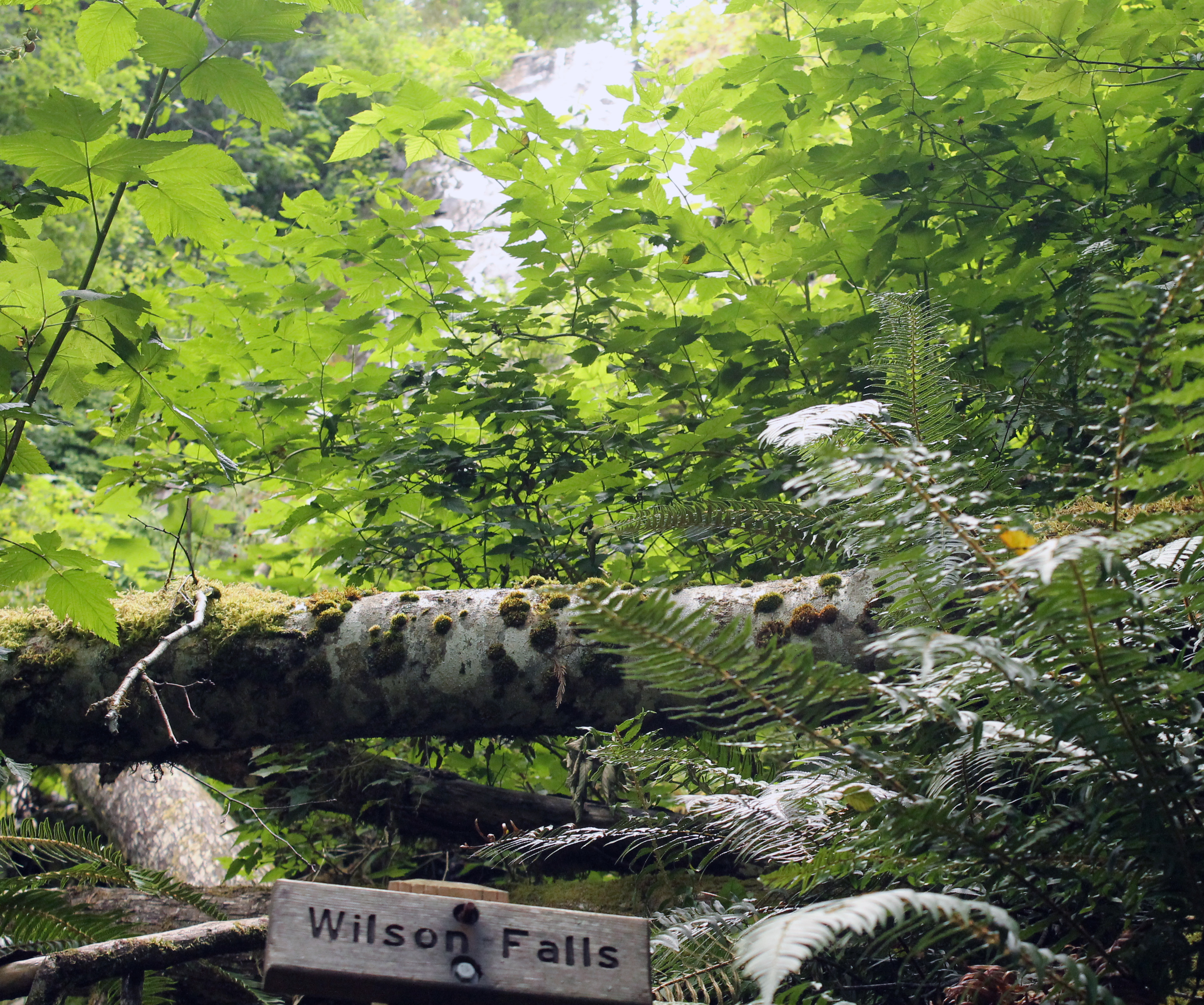